Whether you want it or not, Sharknado 3: Oh HELL No! is hitting SyFy on July 22nd. The movie made a big splash at Comic Con over the weekend, where fans got to sink their teeth into a sneak peek at the new movie. In the streets, it was a frenzy, as shark protesters, wearing shark costumes, did their best to get fans chomping for the new movie. 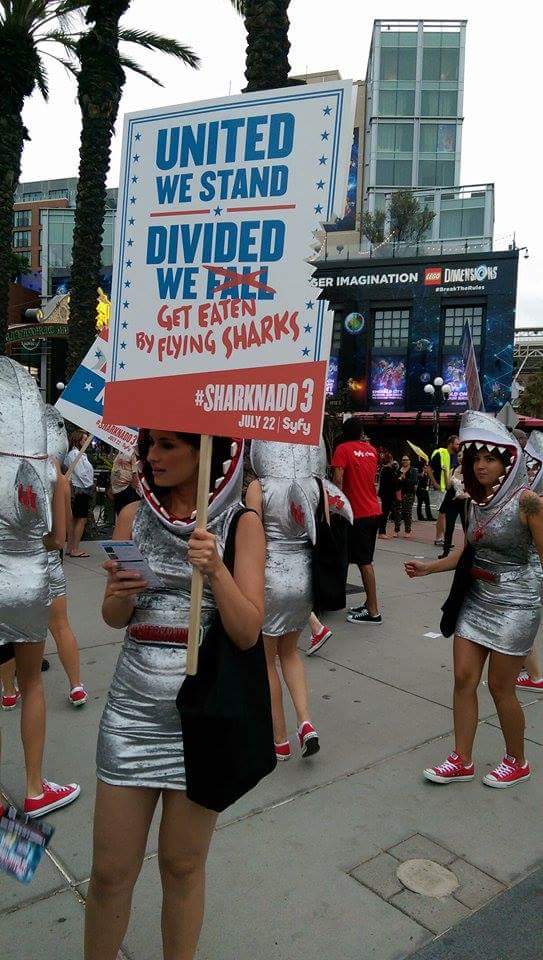 The things of protesters were all part of the huge campaign at Comic Con for the all new Sharknado 3. The film airs at 9p.m. on SyFy and will feature much of the retuning cast, as well as a few surprises.

Video-Check out Sharknado 3 OH HELL NO! in the streets of San Diego

Yes, it’s a bad movie, but sometimes bad can be fun. That definitely seems to be the case with the Sharknado series.
Most of the news, unfortunately, focused on Subway spokesman, Jared Fogel, who was cut from the film. He is under investigation after an employee of his was arrested for child pornography.

The fun will start on the East Coast, and the destruction will go all the way to Universal Orlando, where we’re told the park will be shredded by sharks.
Universal has started selling merchandise at the park promoting Sharknado.
Personally, Sharknado is the type of silly film that can only be expanded into other mediums, including temporary theme park attractions.
We’d also like to see Sharknado the musical happen at some point.

For more information about Universal Orlando, before it’s destroyed by sharks, visit the official website by clicking here!