The Terminator franchise is one of the most celebrated, groundbreaking series in cinematic history. Well, it was…at least. Subsequent arguments over rights, and sub-par sequels have left the franchise in shambles. This weekend, Terminator: Genisys looks to reboot the franchise, quite simply by rebooting what you know of Terminator films. At the same time, it takes one of the most technologically advanced, and celebrated theme park attractions of all times, and basically makes it obsolete. It also puts the attraction at Universal Orlando higher on the chopping block than it’s ever been before. Is the future of T2:3D sealed, or is the fate still yet to be made? 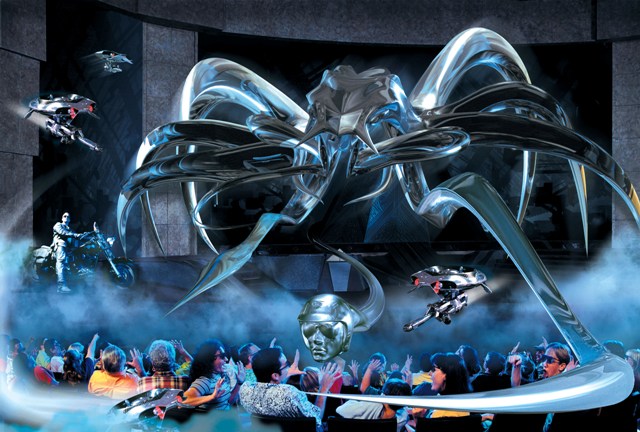 TERMINATOR 2: 3-D Ð A cyborg from Terminator 2: 3-D Battle Across Time at Universal Studios theme park gets up close and personal with guests. This virtual adventure is one of the most elaborate and technologically advanced theme park experiences ever created. Based on the blockbuster ÒTerminatorÓ films, the centerpiece of the attraction is a 12 minute, $23 million 3-D film shot especially for Universal Studios that features the cast and creative team from the Terminator films. T2-3D puts guests in the middle of the action through innovative 3-D filmmaking, live action stunt work and state-of-the-art effects.

In order to talk about the fate of T2:3D we have to give a little synopsis of the new film, Terminator: Genisys. The mini review will contain a few spoilers, so if you don’t want to have any bit of it spoiled, then turn back now.

The difference comes in when the resistance sends Kyle back, something happens to John at the last minute. From there, everything we think we know goes haywire. Instead of finding Sarah as a helpless, and clueless woman who needs to be made strong, we find her as a strong badass, ass kicker, who already knows about everything that is going to happen. We also find “Pops” played by Arnold. He’s an aging Terminator who was sent back by someone unknown to protect Sarah Connor when her parents were killed. YES…the machines finally got smart, and sent a Terminator back to kill Sarah and her parents when she was young. So, the good guys also sent back a Terminator, who saved Sarah, and who became her parent.

When Kyle Reese goes back to 1984, he finds a different scenario waiting for him than the one John Connor painted. He also fails to “mate” with Sarah (as Pops keeps saying), and thus fails to make John Connor. Sarah and John find themselves in 2017, where they fight a corrupted John Connor, and keep Skynet from happening…or so they think. OH, and apparently Dr. Who is in it.

So, how does T2:3D play into all this? Well, since we are jumping timelines, and John Connor doesn’t exist up until at least 2017, T2 doesn’t happen at all. To steal another time travel film’s line- “It’s erased from existence”.  T2:3D at Universal Orlando thus becomes null and void.

The only problem, this is real life, and it doesn’t magically just turn into some major new attraction.

The rumor has been that Terminator has been on the chopping block for some time. By today’s standards, it is pretty outdated. The 3D is no longer eye popping, and the effects are hokey. The coolest thing about it are the live actors, and the robots.

If the new Terminator is successful, and they make more in the series, Universal could in theory redo the attraction to include a new version of Cyberdyne, and the T-1000’s. That would mean they’d need to get Arnold back to film a new part for the film, and his new…tricks. The big question is, will it happen?

There are big changes rumored to be coming to Universal Orlando’s front end, with attractions like “Lucy a Tribute” and Shrek 4D allegedly on the chopping block. Other major franchises are said to be in line for those areas, which could happen as early as this year, after Halloween Horror Nights.

Paramount now holds the rights to the Terminator Franchise, which leaves Universal to make a deal with them. A deal is allegedly in place for a new attraction, based on a Paramount film franchise that will let guests “Boldly Go”. If that rumor is true, then a new version of Terminator could be happening sooner than we thought. Regardless, Terminator is one of the oldest attractions in the park, besides ET, and is so outdated that it still has Shaquille O’Neal playing for the Orlando Magic.

With Universal Orlando consistently updating the attraction line up, we’re surprised that it hasn’t been chopped sooner. Now, the real question is, will it get chopped or simply updated? TIME will tell.