Ghost Town at Knott’s Berry Farm will turn 75 years old in 2016. It’s one of the most recognized, and celebrated areas in theme park history.  The park is getting ready to celebrate the area in a big way, and as part of the big celebration, Knott’s is closing down one the park’s signature coasters, for a limited time, as well as another ride. 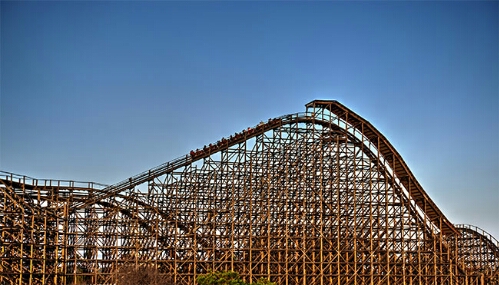 Ghostrider will be closing temporarily,  as the park is planning a restoration of the classic coaster. The park will also close the Screamin Swing in the area as well, but that ride will stay closed permanently.

Ghostrider opened in 1998, and is the longest, tallest, and fastest wooden coaster on the west coast. The ride will close on September 8th for a major restoration. There’s no other information about the closure at this time, but this sounds like an awesome start to a huge celebration.

The biggest rumor is that Ghostrider will get a huge makeover, courtesy of Rocky Mountain Coasters.  The company takes wooden coasters,  and turns them into super fast steel hybrids. Massive loops, steep drops, and extreme loops are the signatures of a Rocky Mountain Coasters make over. While that might sound like a great idea, there have already been two other major coasters being by the company already announced. This could be the third, but that seems unlikely, as Roar at Six Flags Discovery Kingdom is also rumored to get a new make over.

More than likely this will just be an extensive rehab, which will bring Ghostrider back to opening day status.

There will be a major announcement about the rehab, as well as the other celebrations coming in November.

Stay tuned for more from Knott’s,  and be sure to get social with us on Facebook and follow along with us on Twitter @BehindThrills for the latest updates!

For more information about Knott’s Berry Farm,  including tickets, visit the official website by clicking here!