There’s nothing in this world that is better than seeing the wonder in a child’s eyes as you introduce them to something magical. Being a father, and an uncle, I’ve found more satisfaction in watching things through the eyes of my two kids and nephew than anything else in this world. For millions of people around the world, having children is a dream that they just can’t grasp, even though they want that feeling, and want to feel that love. Our story today follows one of those couples, and follows their story through the process, and ends it in one of the most magical places on earth, The Magic Kingdom at Walt Disney World. 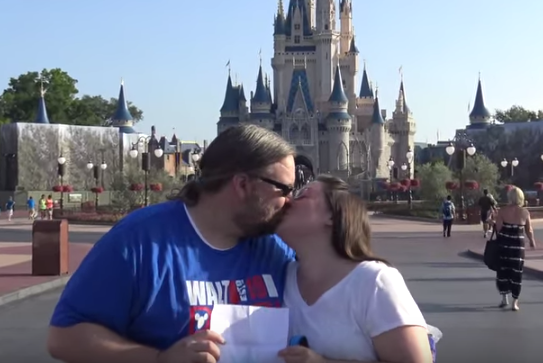 Gender reveal parties are the new rage in baby announcements. Whether you like them or not, they are pretty much here to stay. They actually are a great way to add a little surprise, in a world where nothing really surprises us anymore.
In the ultimate gender reveal party, Eddie and Sarah Wells decided to reveal the gender of their baby at Walt Disney World.
Since family and friends couldn’t make the trip, they enlisted the help of one of our friends, Big Fat Panda, to help make an amazing moment even more magical. Big Fat Panda has one of the coolest collections of Disney (and other theme parks) videos. Sarah and Eddie reached out to Panda to help reveal if their baby was a boy or a girl in a really cool way…they did it with Magic Bands.

Why was it important to have this special moment at Walt Disney World? For Sarah and Eddie, Disney is a big part of their lives. Eddie grew up in Florida, with his trips to Disney being a huge part of his childhood. Sarah had grown up Disney as well, but had never been to Walt Disney World until their honeymoon.
Disney was embedded in their lives, and was a part of who they were.
Disney also provided an escape when things weren’t always the best, especially when other attempts to have a baby had failed.
Several times over the past three years Sarah and Eddie had tried to have a baby, but each time it ended badly. Each time, Disney was there as a reminder of the memories they had made already, and the memories they wanted to have with a their own family.
Finally, the timing was right and everything went right. The baby was on the way, and it was time to find out the gender.
The two made the trip from Montana, with the gender in an envelope, two weeks later. How could they wait?

“If I told you we only waited for two weeks, I’d be lying. Two weeks is just a drop in the bucket that is the three years it took us to get to this point.” Eddie said “Two weeks was nothing it was the three years that was rough.”

It was the first memory of a new family, and it was at the place where millions of families make memories every day.

Congratulations to Sarah and Eddie on this awesome first memory of their new family.
Stay tuned for more from Walt Disney World, and be sure to get social with us on Facebook and follow along with us on Twitter @BehindThrills for the latest updates!