D23 dropped the mic in a huge show of force as they rolled out previews for attractions coming to pretty much every single Disney Park in the coming years. From Toy Story Land, to a new nighttime show at Animal Kingdom, there are tons of new attractions on the way. We’ll give you a look at some of the ride elements themselves that are coming to the new lands and at Disney Parks. 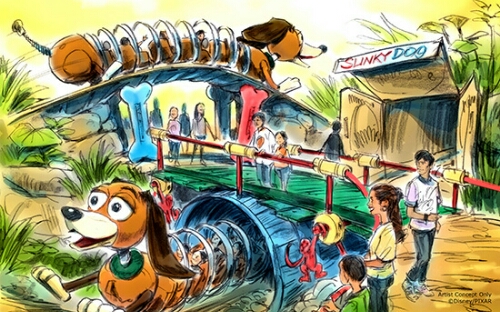 We’ve seen all the presentations, we’ve heard about all the new rides. Let’s take a look at some of the coolest attractions coming very soon to Disney Parks!

The new coaster will give guests the chance to take a ride on Slinky Dog through a kids imagination, as Andy constructs the ultimate coaster playset.

Video-Rivers of Light at Animal Kingdom

The all new Rivers of Light at Animal Kingdom will debut next year. We get a sense of the amazement that will accompany the new show.

Hong Kong will get the all new Iron Man Experience, which will take guests on a wild adventure with Tony Stark against the forces of Hydra.

It’s going to be a lot of fun over the next few years to see all the new announced attractions finally come to life!