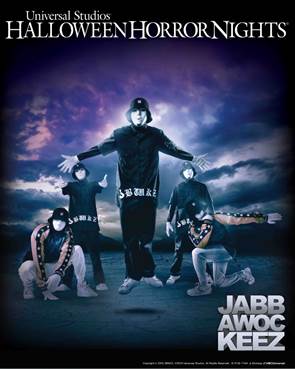 The original champions of “America’s Best Dance Crew” on MTV, Jabbowackeez have redefined the dance troupe with amazing new performances, and have been headlining the acclaimed “PRiSM” show at the Luxor in Las Vegas, and are following up with a newly reimagined performance at the MGM Grand in Las Vegas this fall. They’ve appeared on numerous television shows, and even in some huge sporting events.

“The Jabbawockeez are the perfect complement to ‘Halloween Horror Nights’ as we continually seek to elevate our event with compelling, cutting edge entertainment,” said John Murdy, Universal Studios Hollywood Creative Director and Executive Producer of “Halloween Horror Nights.”  Their progressive art form parallels our groundbreaking approach to creating movie quality haunted attractions and we are excited to collaborate with them to infuse their energetic Las Vegas show into our ‘Halloween Horror Nights’ event.”

The new show will take place in the Castle Theater at Universal Studios Hollywood,  and will be the first show at the event since Bill and Ted’s Excellent Halloween Adventure was pulled in 2013.

The event will run on select nights from September 18th until November 1st,  and is a separate ticket event.
The event has already announced mazes based on Crimson Peak, The Walking Dead,  and Insidious.

For more information about Halloween Horror Nights at Universal Studios Hollywood,  including tickets, visit the official website by clicking here!

TAGHalloween 2015 Hhn 2015 HHN Hollywood Jabbowackeez
Previous PostKermit and Miss Piggy call it quits after 40 years, still the Muppets will go on Next PostHowl O Scream let's the garden run wild as Deadfall is set to return