Kermit and Miss Piggy call it quits after 40 years, still the Muppets will go on

Celebrity break ups are just plain silly. No one really expects Hollywood power couples to last, and very few make it. Still, when you see a couple that has gone through ups and downs, and still managed to stay together after 40 years, there just seems to be hope for the world. Now that hope is gone, as one of the biggest power couples in Hollywood have called it quits. Miss Piggy and Kermit the Frog are now officially single. The two announced on Tuesday that they were going their separate ways. 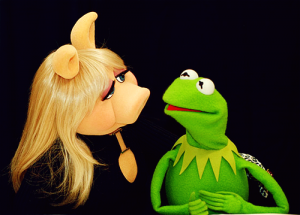 In a statement on Tuesday, Kermit and Piggy both acknowledged the break up and said that the split was mutual:

Here is the official statement from @RealMissPiggy and myself regarding our relationship: pic.twitter.com/uHCSsokqWR

Yes, this is all a huge publicity stunt for the new show coming to ABC, which will be a more adult version of the show.
Miss Piggy and Kermit have been an item since 1976, and will keep things professional as the new show moves forward. We’re pretty sure that we haven’t seen the last of this power couple.

While the Muppets will hopefully conquer television, rumors are circulating that the long running Muppet Vision 3D at Disney’s Hollywood Studios could be shut down, as that park gears up for a huge makeover. Could the closure be part of the agreement of the break up? While it sounds like the closure could be to make way for Star Wars Land, we would definitely like to see an update on the classic (yet dated) attraction.

For more information about the Muppets at Disney, including tickets, visit the official website by clicking here!