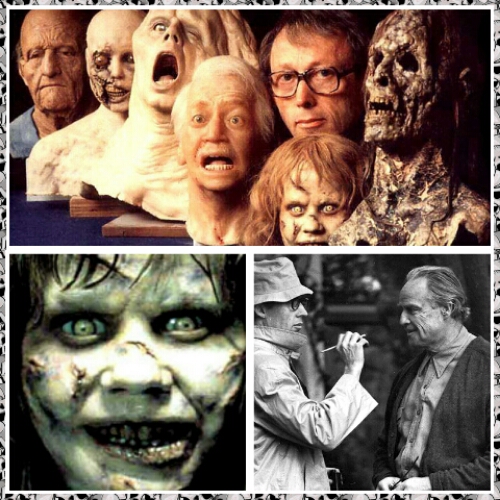 Christmas 1973- cinema goers fainted, ran out of the theater, and vomited. People reported sleepless nights and Catholic priests received requests for exorcisms.The Exorcist has been consistently ranked one of the scariest films in history.While the most popular image is arguably the deformed, scarred face of the possessed Linda Blair, one of the most impressive artistic accomplishment is the age makeup on actor Max Von Sydow created by artist Dick Smith.

Dick Smith is to the medium of horror makeup, what Ralph Goings is to the medium of painting- creating artwork that is so incredibly realistic that the viewer cannot differentiate if it is fake or real. Much like the artists of the Renaissance who studied anatomy by dissecting dead bodies, Smith was a pre-med student at Yale where he studied anatomy. During college he became interested in makeup and began work for NBC. His amazing sculpting and painting would allow him to do some of the most realistic old age makeup of all time in films such as Little Big Man, The Godfather, and Amadeus (for which he won an Oscar).

Before Smith the standard practices of makeup was to use one piece masks with wrinkles and other facial features built into it. The problem was that the latex would shrink and become unusable. Smith created the process of using small overlapping foam latex appliances built on the face. He was very talented in creating multi pieces that would form together perfectly. Smith used paint to create age spots on the skin. 34 His artwork was so perfect in fact that it was rumored that the actor Max von Sydow had difficulty getting work after the Exorcist as many people believed that he was in his 70s and not in his early 40s.

The “Godfather of Makeup” passed away last year at the age of 92. His legacy on horror and films lives on.

TAGMonday Monster Maker
Previous PostD23 Expo 2015- The must see events at this year's Expo Next PostKong rears his head as construction continues at Universal Orlando!