We’re going back! New event celebrates anniversary of Back to the Future franchise

If you’re going to build a time machine, why not do it in style? This October, the future will officially be here, on October 21st at 4:29 p.m. to be precise. That’s the day that Doc Brown and Marty McFly traveled to Hill Valley, 30 years into the future. That’s also the day that one of the  biggest celebrations of Back to the Future will kick off, and it’s all to celebrate the 30th anniversary of one of the most influential, and timeless film series created, Back to the Future. “We’re Going Back” is a huge new celebration just for Back to the Future fans. 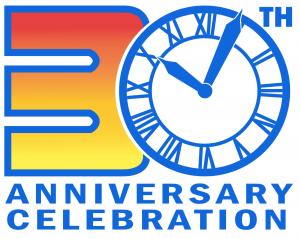 “We’re Going Back” is a huge four day celebration that will take place in Hollywood, California…where all the time traveling hi-jinks happened. It was 30 years ago that Marty McFly went back in time to 1955, and set off a cataclysmic chain of events that would alter the time/space continuum, and send the duo on an adventure that lasted three films.

The new event will celebrate the film, and will take fans to places where the event was actually filmed, and it all begins Wednesday, October 21st.

On Thursday, fans will travel over 100 years, through the town of Hill Valley. The celebration will create all three films in their living, breathing version of Hill Valley, California. Soar above the crowds on hoverboards in 2015 with the help of the original hoverboard stunt team and actual members of Griff’s gang! Rewind to 1985 with pro skateboarders and Back to the Future stunt doubles, Per Welinder & Bob Schmelzer, who will show fans how it’s done… on boards with wheels.  Hop  down classic car filled streets on your moon boots in 1955 and watch Jackie Gleason while we eat barbeque, pass the point of no return and square dance with the Doc in 1885! There will also be a train time machine from Back to the Future III, and the actual diesel train that smashed the Delorean in the film.  See the World Premiere of the documentary “Back In Time,” and the Director’s cut of the documentary “OUTATIME: Saving the DeLorean!” Preview screen used props and rare Back to the Future memorabilia that will be auctioned off live at “We’re Going Back” on Saturday, October 24th, and finish the evening, under the stars, with an outdoor screening of “Back to the Future III

Friday, guests can ride along and see the actual filming spots where the film was shot, including all of the iconic spots.

Saturday the auction house, ScreenUsed.com, will host the official 30thAnniversary of Back to the Future prop and memorabilia auction! Some of the most iconic props from the trilogy, along with one of the largest collections of Back to the Future memorabilia ever assembled for sale, will be auctioned off live with the help of some very notable guests; proceeds will benefit “Team Fox, the Michael J. Fox Foundation for Parkinsons Research.” That evening, Doc is setting the time circuits to 1955! Fans will have one final opportunity to attend the world’s most accurate, immersive recreation of the iconic “Enchantment under the Sea” dance! Mingle with the cast and crew of the trilogy and rock out with the “Flux Capacitors,” featuring Marvin Berry!

Finally, “We’re Going Back” will take you all the way back… to where it all began: the “Twin Pines” mall, aka “Lone Pine” Mall, aka Puente Hills Mall in the City of Industry, CA. Before returning to your own timeline, spend the evening immersed in an outdoor screening of the original “Back to the Future” film! Expect huge crowds, celebrities, plenty of movie vehicles and the return of the “Flux Capacitors” band for a very special finale.

Stay tuned for more Back to the Future fun, and be sure to get social with us on Facebook, and follow along with us on Twitter @BehindThrills for the latest updates!

For more information about “We’re Going Back” including tickets, visit the official website by clicking here!