Is Crimson Peak coming to Universal Orlando this Halloween after all? Not like you think!

Crimson Peak is one of the most anticipated horror films of all time. It’s also a point of jealousy with Universal Orlando fans (well most we’ve talked with). The all new film by acclaimed director, Guillermo Del Toro takes audiences into a haunted house story like never before. It stars Tom Hiddleston, and looks to be about as atmospheric, gothic and as creepy as you can get. It promises to be one of the greatest horror stories of our time. It also promises to be an insanely cool new haunted maze at Universal Studios Hollywood’s Halloween Horror Nights. 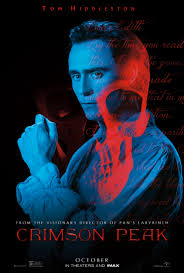 Halloween Horror Nights at Universal Studios Hollywood is putting the final touches on all the big mazes this week, right before the event opens this Friday night for the whole world. Crimson Peak is following the tradition of amazing new mazes that come out before the movie hits theaters.

Universal Orlando fans are extremely jealous of the Hollywood counterpart(again, the ones we spoke with), as Crimson Peak is being talked about on such a huge level. The praise for the film, which opens this October, is already through the roof. However, while Guillermo Del Toro has been busy talking to the press about the new film, and maze, he might have let something slip. Orlando is getting Crimson Peak as well.

In a story from IGN, GDT talks about the experience coming to Orlando:

IGN: There is a Crimson Peak presence at Halloween Horror Nights at Universal in Orlando as well this year, right? Did you talk to the team there about a maze?

Del Toro: We didn’t talk about the maze but we did talk about things that would be exclusive to Orlando like a make up effects and wardrobe exhibition. They’re going to have some of the wardrobe from the movie, which is quite beautiful and powerful. The movie has a level of visual and audio design of high caliber and beauty. They wanted to showcase some of the craftsmanship of the wardrobe and the displays and stuff like that.

Now, it’s a little too much for us to ask for a maze at this point. Universal Orlando’s Halloween Horror Nights is celebrating 25 years of terror, and they already have nine haunted mazes. However…could this new display, and exhibition be part of something else? Perhaps, the Horror Make Up Show?

Very likely, yes. The last major update to the show was after the Universal film, The Wolfman. There was a major makeover of the pre-show area, that included new props from Hellboy (another GDT film) JAWS and more.

If there is going to be a new presence, it would make a lot of sense to debut it at Halloween Horror Nights, or at least during October. While it wouldn’t be as cool as a house, the idea of a makeover for Horror Make Up is also very promising. The film looks to be like it could be one of the biggest films of the year. So far, there is no official word from Universal Orlando about it, but we’ll keep you updated when we hear something.

TAGCrimson Peak HHN Hollywood Horror Make Up Show Universal Orlando
Previous PostBehind the Scenes of Crimson Peak: Maze of Madness at Universal Studios Hollywood HHN 2015! Next PostUniversal Beijing opening set for 2019, and will be the biggest Universal park to date