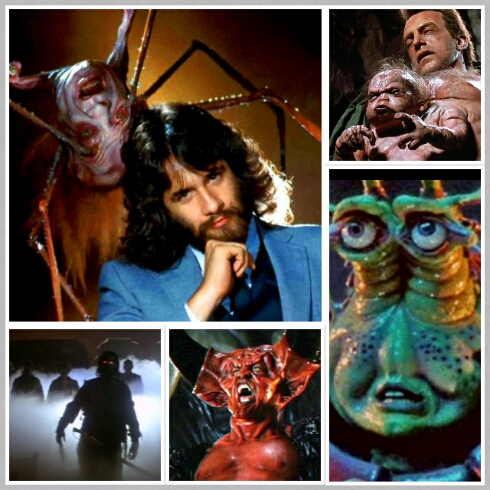 This week Monday Monster Maker focuses on one of the most mysterious names in Hollywood: Rob Bottin. While is work isn’t as lengthy as Greg Niccotero’s or Tom Savini’s, his work in The Howling and The Thing is so iconic, its inspiring artists until this day. He was touted as the “Boy Wonder” he was supposed to be the next big thing. But with only one credit to his name in the past decade, it leads the horror fans to wonder: “What the hell happened to him?”.

Born in 1959, Bottin was a chubby kid who enjoyed watching old horror films. At the age of 14 he submitted a series of illustrations to special effects artist Rick Baker, who impressed with the young teenagers work promptly hired him. His first film credit was the 1970s remake of King Kong. Bottin worked on several films (including designing and staring as one of the Star Wars Mos Eisley Cantina band members)with Rick Baker before branching out on his own at the age of 18.

Rob Bottin’s solo work was “The Howling”, which he was asked to create an on screen transformation from man to werewolf. Using the Rick Baker invented technology, Bottin’s werewolf transformation scene came out right before American Werewolf in London reached theaters.

Bottin worked on several films for Joe Dante, but his signature masterpieces took place with noted horror director John Carpenter. After seeing what he could do with the humanoid figures from “The Fog”, Carpenter hired Bottin to work on his remake of the film “The Thing”. It is reported that Bottin ” worked on The Thing seven days a week (including late nights) for a year and five weeks straight, producing every creature effect” It was reported that when the project ended that John Carpenter made Bottin check in to the hospital for exhaustion.

Of course, “The Thing” was not Bottin’s last work- throughout the 1980s and 1990s his career was filed with movies like “Legend”, “Total Recall”, “RoboCop” and “Mission Impossible” and “Fight Club”. However, for several years Bottin essentially dropped off the face of the planet. There were rumors that he retired and never wanted to work in Hollywood again. He didn’t do interviews or make appearances. There were rumors that he changed careers all together and went into real estate. However, last year it was reported that Rob Bottin worked on the infamous “Purple Wedding” episode on the HBO show “Game of Thrones”. Only time will tell if this is the beginning of Rob Bottin’s comeback to the gorgeous gore and monster mayhem that he is famous for.

Stay tuned for more Monster Mayhem, and be sure to get social with us on Facebook and follow along with us on Twitter @BehindThrills for the latest updates!
For our latest theme park videos please be sure to subscribe to us on YouTube!

TAGGame of Thrones Horror John Carpenter's The Thing Monday Monster Makers
Previous PostHave dinner in the Great Hall from the Harry Potter films this Christmas Next PostBurger King rolls out black Whopper for Halloween, and it's not bad