The Hatbox Ghost gets into the Christmas “spirit” as Haunted Mansion Holiday returns to Disneyland!

Christmas is getting closer! Can you feel it in your bones? The Haunted Mansion at Disneyland made huge news this year, when the legendary Hatbox Ghost re-materialized for the 60th anniversary of the park. That left many wondering, would Hatty celebrate the holidays? We got the definitive answer this weekend as Halloween Time at Disneyland made its debut, with Haunted Mansion Holiday. 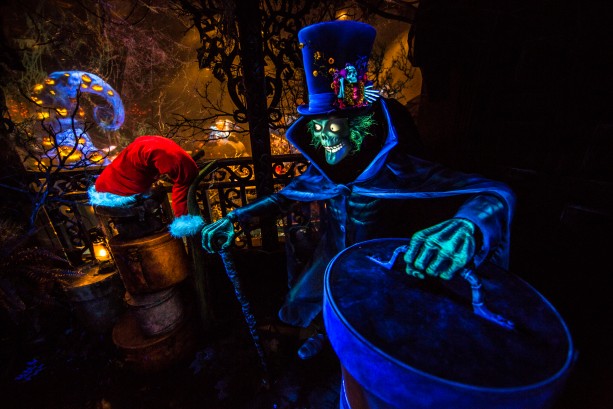 The Hatbox Ghost was a legendary figure that had made it into the attraction for a very limited time. The figure was removed, where it went from forgotten, to folklore to legend.
This year, not only has Hatbox returned, but he’s now back to celebrate the holiday season with Jack, Sally and the rest of the Nightmare Before Christmas crew.

The Hatbox Ghost is here to celebrate, and he even has a new hat to add to his collection.
The overlay happens every year at the Haunted Mansion, and is one of the most popular attractions in the park. It will continue until January of 2016.

For more information about Halloween Time at Disneyland, including tickets visit the official website by clicking here!