Universal Beijing opening set for 2019, and will be the biggest Universal park to date

Universal Parks and Resorts are stepping up their game worldwide, with huge parks already established in Japan, and most recently in Singapore. Now the company has officially signed a deal to bring a new park to life, as well as released an opening date. The deal will bring the sixth and largest Universal theme park to life, in Beijing, China. 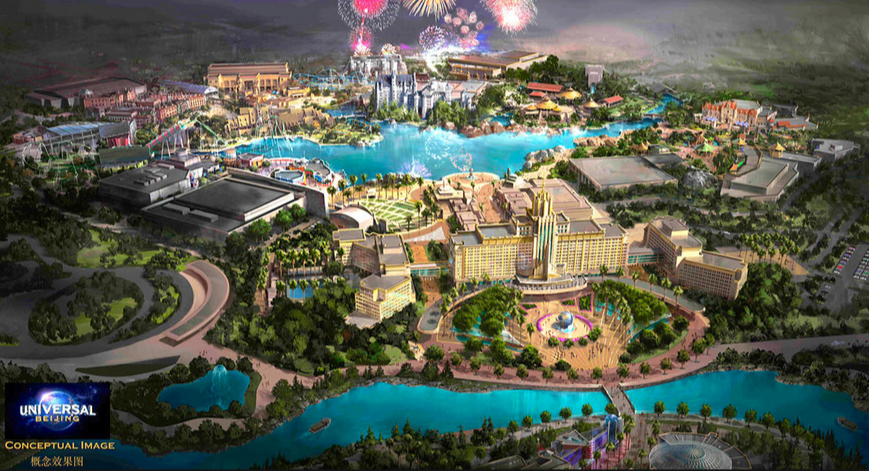 Universal Beijing will be the largest Universal park to date, encompassing 120 hectacres (or about 300 acres) which is larger than the last park built in Singapore. The new park will open in stages, with the first part to open in 2019. The cost of the core project is expected to cost around 21.5 billion yuan (or $3.37 billion). The first stage will include the Universal theme park, as well as a Universal Studios themed hotel, which will be the first ever in the world. There will also be a CityWalk entertainment and dining complex.

There have been no rides announced, as of yet, but the concept art shows replicas of popular Universal attractions such as Incredible Hulk, Jurassic Park, and the Wizarding World of Harry Potter. The park will take Disney’s lead, and combine the rich Chinese culture and history, with the Hollywood movie experience. Steven Spielberg will serve as creative consultant for the new park, just as he had for Universal Orlando.

Beijing Shouhuan Cultural Tourism Investment Co., Ltd., a consortium of four state-owned companies, and Universal Parks & Resorts, a business unit of Comcast NBCUniversal are partnering up to bring the project to life. Universal will not stop in 2019. There are already plans on the table to bring another park online shortly after the grand opening of the first park, as well as another five onsite hotels. That will rival Universal Orlando’s line up, which will open their fifth onsite hotel in 2016, and will see an expansion of their fourth hotel, Cabana Bay Beach.

Stay tuned for more from Universal Beijing, and be sure to get social with us on Facebook, and follow along with us on Twitter @BehindThrills for the latest updates!

TAG2019 attractions Universal Beijing
Previous PostIs Crimson Peak coming to Universal Orlando this Halloween after all? Not like you think! Next PostNew Mary Poppins musical in the works for the big screen at Disney