This year at Universal Orlando’s Halloween Horror Nights 25, the park is celebrating 25 years of terrifying guests. The event has a very eclectic mix of horror movie franchises, television terror, and a collection of their own past horrors. There’s such a great mix of blockbuster franchises, and original ideas, as well as throwbacks to past years, that it’s hard to pick a favorite. Once you’re inside the the dark mazes, you are at the whims of the creators, and many times you’re left with the burning question “How’d they do that”? If you’re the type that loves the horror that’s created, and you want to see more, then we have a treat for you! As in past years, Universal Orlando offers a unique Behind the Screams tour that allows you to “Unmask the Horror”. The tours allow you to get behind the scenes and not only see the houses with the lights on, but also get little tidbits of the making house, including special hidden things that you may not notice with the lights off as you’re screaming your way through. This year there are two tours, which gives you a total of six houses. We’ll take you through each house one by one, and give you a photo tour, as well as some little hints and information about the house. Are you ready? 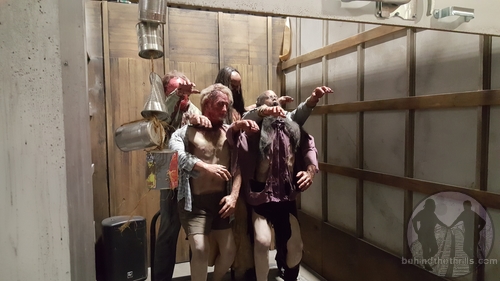 Unmasking the Horror #1-The Walking Dead

The Walking Dead is on season six of zombie chaos, as Rick, Darryl and the entire surviving world must figure out just how they are going to keep living, and readjust to the world that has been destroyed. The show has been the basis for a haunted attraction at Universal Orlando (and Universal Hollywood) for the past three years at Halloween Horror Nights, with each years being bigger and different than the last. This year is no exception, as Universal has taken guests through season five of the Walking Dead. 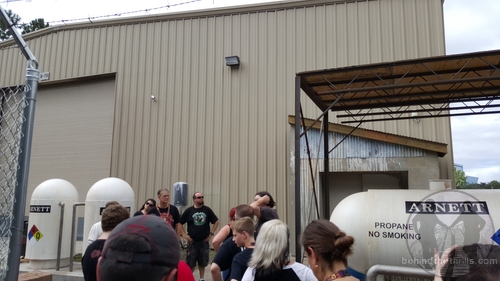 Right off the bat, guests are thrown into the clutches of the villainous Terminus, as the gang unwittingly traverses into a gang of cannibals. The first thing that guests see are the propane tanks, which aren’t really propane tanks at all. In the show, they are huge Styrofoam barrels, that are blown up with a series of explosions. Here they are just huge pieces of pipe. 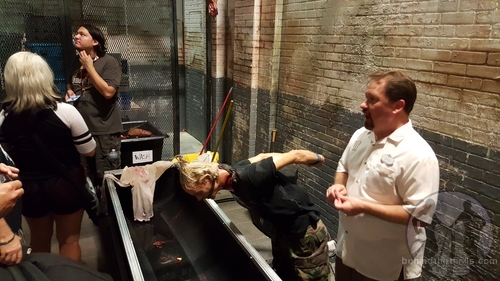 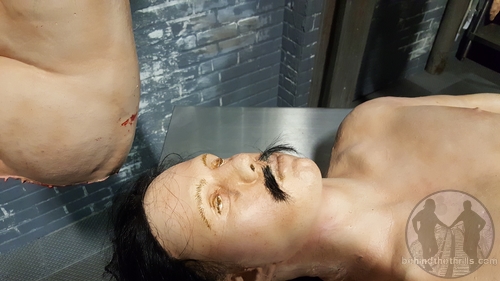 This year The Walking Dead held several obstacles for the Art & Design team of HHN. Normally, the dummies that are used for body parts are covered with blood and guts, and tons of gore. This year, for the Terminus scene, the cast had to get clean bodies. The crew actually had to find the cleanest body, and scrub it down, and get all of the gunk, and fake blood off of them. This is simply because the scene is a cleaning room. It’s very disinfected, and very much what you find in a butcher shop. 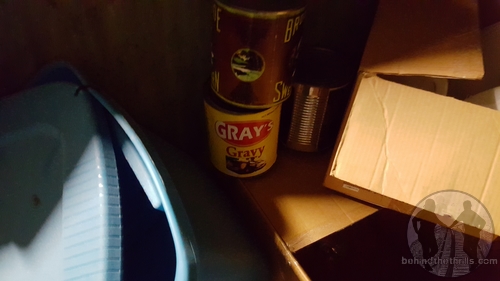 As there is every year, the houses are full of little nods to the A&D team. If you look close enough, you’ll be able to find them. There are also little tributes to other houses, and props used from previous years. We counted cans, tombstones, and dead bodies among the Easter Eggs hiding in the Walking Dead. 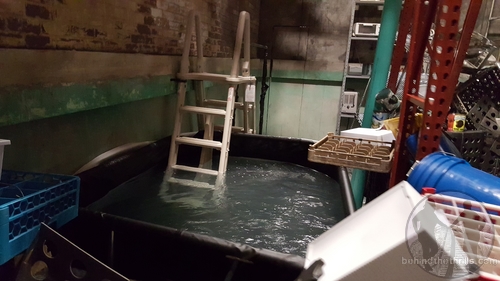 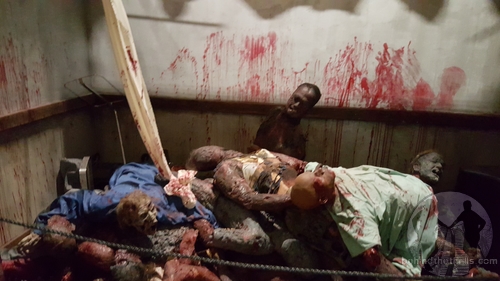 This year the attention was on the scenes that the guests would instantly recognize from the show. The biggest of which was the use of water, as the scareactors were submerged in knee high pools. Sure, the pools were small, but the team wanted to go for the realistic effect of you sloshing through the flooded food bank. There’s also an elevator scene, from the first part of the season in Atlanta. The effect is simply a pile of bodies, but add strobe effects, and sound, and you get an impression that the zombies are moving around. It’s all about your mind playing tricks on you. 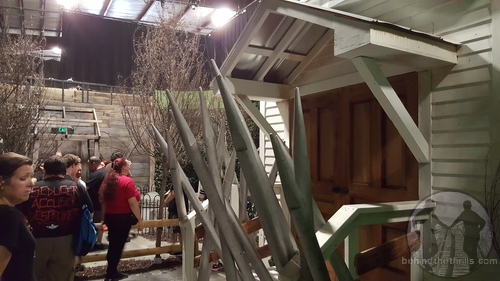 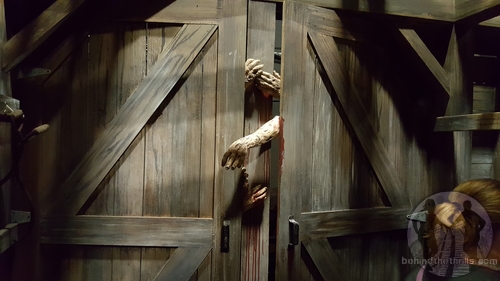 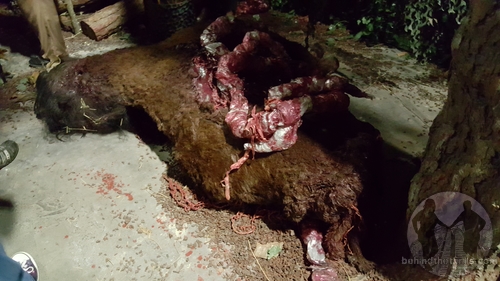 Other huge scenes include the church, where Gabriel hides, as well as the barn that moves during the storm. The effect for the barn doors is similar from two years ago, where Walkers are trying to break through the barn doors. 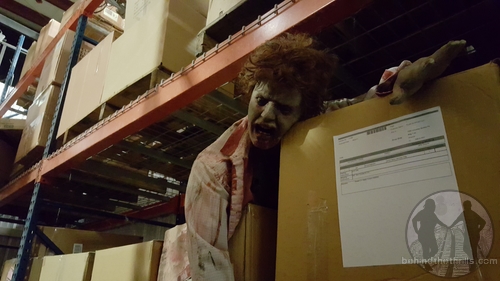 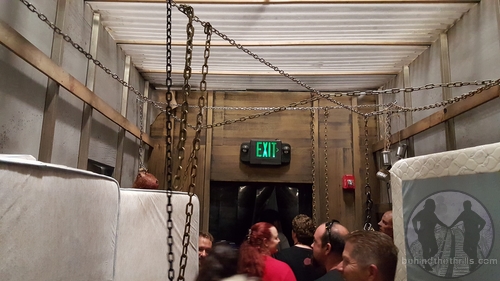 This year, the house is built up, like directionally speaking. The sets were built more vertical than before, with a tight squeeze in between the pathways, creating a more claustrophobic feeling. The props and actors also come from all different sides and angles, with the most effective being the corner scares. These are designed to have you looking straight ahead, and have the actors popping out from a corner. Another great technique is the use of connected props. An actor can trigger motion on the rest of the props, and still scare you as you come by. It’s effective, and a great use of the scenery.

About the Tour
The Unmasking the Horror Tour is a lights on VIP tour of this year’s Halloween Horror Nights houses. It is available for an extra fee. This is our fourth year doing the tours, and our tour guide for all three years has been David, who does an amazing job. In fact, we ask for him personally. After four years, David knows the kind of stuff that we love to hear, and pays extra attention to all the details. David keeps the tours rolling, but gives you plenty of time for pictures, and questions that you may have about the houses. In fact, all of the tour guides do. It’s pretty much a labor of love, as the majority of the guides who are doing it now, have done it for all ten years of the tour’s run.  The tours do go in depth, and are very bloody, showcasing tons of gore from behind the scenes, while it is recommended for HHN Fans, and Horror lovers everywhere, it is not recommended for those 12 and under. It’s definitely a great way to cap off your HHN Experience.

The remaining tour dates are Oct 21, 22, 23, 24, 25, 28, 29, 30, 31 and
Nov. 1, and they can run anywhere between two hours, and 6 hours, depending on the tour you choose. The tours do sell out, so advanced reservations are required. You can get more information about the tours by visiting the official RIP Tours website (click here) or by calling 1-866-604-7556.
Stay tuned for more from HHN 25, and be sure to get social with us on Facebook and follow along with us on Twitter @BehindThrills for the latest updates!
For our latest theme park videos please be sure to subscribe to us on YouTube!