The Skyscraper Skyplex, which will be home to the world’s tallest roller coaster, has suffered a minor setback on Thursday, as the Orlando Planning and Zoning board voted down the project in a 4-3 vote. While that seems like a huge roadblock for the project, which is still hoping for a 2018 opening date, project manager and owner Joshua Wallack is confident that it’s only a hurdle. 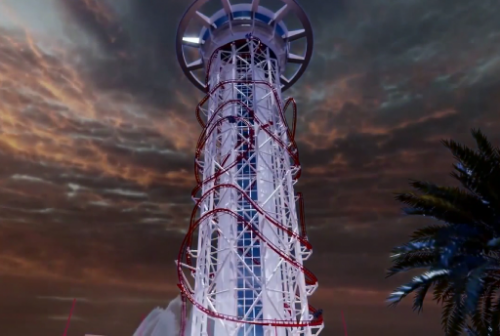 The Orlando Business Journal reports that the vote raised eyebrows when the board said that light issues would be a problem with the project, something that the board has no business in addressing. The other big issue is the height of the project, saying that 570 feet is just too high for the coaster, even though the FAA has already approved the project. Strangely, Universal Orlando is a huge opponent of the project, arguing that the business will be an eyesore, and that Orlando doesn’t need a huge coaster, stating that Disney and Universal are world class destinations, without breaking records.

Skyplex responded by calling Universal a bully, and saying that they should be worried about Disney’s proposed Star Wars Land, not Skyplex.

The plan calls for the 570-foot Skyscraper polercoaster, a 450-foot SkyFall drop tower, a state-of-the-art open-air plaza, the largest Perkins in the world, the SkyFly 600-foot zipline and a 350-room hotel, a walkway bridge across International Drive, parking structures and more.

So why is Universal so adamant about the project not moving forward? This is pure speculation, but could it have something to do with the future of the Wet n Wild property? It’s a longshot, but Universal is already suing the city and surrounding businesses, stating they are illegally using the lake at Wet n Wild as drainage…a problem that hasn’t been an issue for over the past 30 years.

The waterpark is scheduled to close in 2016, and the site is rumored to be used for a new hotel and entertainment complex, with some saying that it could be the site for a third theme park. Could Universal really be eyeing the Skyplex, which sits just a few blocks away on the corner of Sand Lake and International Drive,  as roadblock on their future plans? We’re not saying for sure that’s what it is, but what other reason could Universal Orlando have for arguing the opening of this project? It will be well away from Universal, and a 500 foot coaster would not have any impact on the resort at all, where it currently sits. But what if the resort expands across International Drive, or even further? Then the argument starts to make a little more sense. Again, not saying for sure that’s what is the issue, but it’s the only reason we can see at the moment.

Still, the project isn’t dead, as it still has to go before the Orange County Commission in December. Skyplex owner Joshua Wallack is confident that many of the board members are still in favor of the project, and just because the Zoning and Planning board doesn’t recommend an idea, doesn’t mean the board will vote it down. The project is expected to create 1,000 permanent jobs and over four thousand temporary jobs.

Stay tuned for more from this story, and be sure to get social with us on Facebook and follow along with us on Twitter @BehindThrills for the latest updates!
For our latest theme park videos please be sure to subscribe to us on YouTube!