Nine things we expect SeaWorld to announce on November 9th

SeaWorld Parks and Entertainment recently announced that their long battle with activists and bad publicity is finally starting to stabilize as profits for the 3rd quarter are up, and attendance is showing a much smaller drop than previous quarters. The company is planning a huge Investor’s Day conference call on November 9th, where they are announcing a new vision for the company’s future. This could include a variety of things, including new attractions, parks, and partnerships. What exactly will be announced? We’re not exactly sure, but we have compiled a list of things that could be announced at Mondays conference.

SeaWorld is looking to launch a new vision for the company, and further it’s relationships with families and consumers, all while bringing people closer with animals and creating a connect with our world.
So what could we see? Here are nine things we expect to see on Monday.

New San Diego Attraction – SeaWorld San Diego’s attendance has been in steady decline for the past few years, in large part by constant activist activity, but also due in large part in the lack of new attractions. Thursday, during the results call, the park announced they will be adding a new attraction to help offset the stalled Blue World Project at the park. No clue what it will be, but a coaster is out. We expect a dark rides and animal experience, similar to the Antarctica attraction at SeaWorld Orlando. 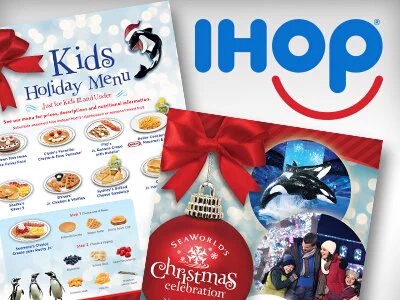 New Partnerships- The company is quietly regaining partners with other companies after several backed out due to pressure from activists in the past year. SeaWorld San Antonio has partnered with IHOP, while SeaWorld Orlando recently forged a partnership with Chick-fil-A. Recently, Matt Reardon took over partnerships and acquisitions, so it’s looking like he’s off to a good start. SeaWorld Orlando is entering into another deal with Coke, where they will be the host of the Annual Passholders lounge, which opens soon. We are looking to hear about even more partnerships with tons of companies that have a more local appeal to the parks, and the areas they are in.

Overseas Expansions- While SeaWorld is looking to rebuild their names in the states, they will also be looking to expand their worldwide recognotion. If rumors are any indication, we can expect to see more news about parks in China and Dubai. These areas are very open to SeaWorld, and will more than likely bring in massive attendance at any parks they operate in those areas.

Agressive San Antonio Expansion- We recently told you the rumors about SeaWorld San Antonio l, and their huge expansion plans that will span several years. Monday, we expect to hear a lot more, and get a solid layout plan for the rest of the projects on the burner.

More Orlando Plans- While SeaWorld Orlando is already bringing Mako to the surface in 2016, there are several rumors of more attractions, including more show and animal habitat changes. The entertainment options, such as Bands, Brew& BBQ should also be expanded a bit to include more dates and bigger names. SeaWorld Orlando could be preparing to outdo Universal in the concert department.

Aquatica Expansions-Aquatica at SeaWorld Orlando, San Antonio and San Diego are SeaWorlds signature waterparks. They all have a great line up of animal based attractions, mixed with family fun and thrills. We could see the massive expansion of Aquatica San Antonio, which could include another major animal upgrade in the next few years. Aquatica Orlando is rumored to be expanding the whole park, and reworking the layout, adding several new attractions as well, including a family water ride through an animal habitat, and a shark exhibit.

Busch Gardens Redefined- One interesting thought is about Busch Gardens, specifically Busch Gardens Williamsburg. That park has been getting a little heavy on the coasters for the past few years, and they aren’t really slowing down on that front. There are plans, however for a “return to roots” kind of campaign with that park. They could see more European based attractions, definitely a lot more shows, and more dining options. On the Tampa front, that park is going to continue to be the thrill capital of the company, and you’ll see more big name attractions pop up. One of the first attractions, after Cobra’s Curse, will be a replacement for Gwazi. Instead of another massive coaster, the park will allegedly put more than one attraction, and center the whole area around the stage, and musical performances. Sure, there will be a few attractions, but the main focus will more music.

Onsite Hotels- SeaWorld already has a great partnership with hotels like Marriott. What if, instead of having to stay offsite at a partner hotel, you stay onsite at a hotel owned by SeaWorld and operated by Marriott? Think of this idea to being similar to what Universal and Loews Hotels has. Universal owns and designs the property and the hotel, and Loews manages the day to day business of it. That could very well be the case with new hotels that could be popping up at both SeaWorld San Antonio, and Busch Gardens Williamsburg. Both parks have a great amount of space available, and are a bit off the beaten path, so not too many great hotels are nearby. SeaWorld does have great amenities with partner hotels, such as free Quick Queue, and free tours. What if that became a standard at the onsite hotels? It’s definitely an idea that more parks are running with.

Blue World Project- San Diego’s Blue World Expansion is on the back burner until they can get this whole silly ordeal with the California Coastal Commission straightened out. Instead of waiting for that to happen, SeaWorld could very well divert those funds to the other parks, and get their Blue World Projects going. SeaWorld Orlando was allegedly going to be the last park to get the expansion, now it might end up being the second, and we could see it completed quite a few years than originally anticipated. That’s definitely a win for everyone!

Keep in mind that all of this is all speculation, based on rumor, and we’re not sure if any of this…or if anything at all, will be announced on November 9th. The upside to any of it is that talk about SeaWorld is extremely positive, and that just about everyone is excited about the new direction that the park will announce on Monday.