The Walking Dead is undeniably huge. The AMC zombie based show breaks records almost every week, and the show premieres and finales just devours the competition. The show has been a massive draw at Halloween Horror Nights in both Universal Studios Hollywood and Orlando for the past four years, and shows no signs of slowing. Now, one of the world’s leading dark ride companies is looking to bring The Walking Dead to life (err…death…whatever) in an all new attraction. 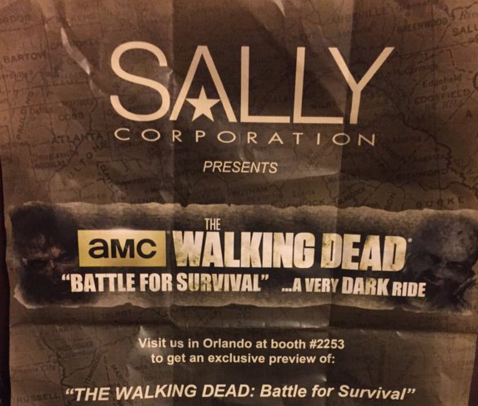 Sally Dark Rides, who is responsible for the ET Ride at Universal Studios Florida, and the all new Justice League attractions at Six Flags Parks, has revealed that they have partnered with AMC for a “very DARK ride”. The all new Walking Dead: Battle For Survival will be unveiled at the annual International Association of Amusement Parks and Attractions (IAAPA) next Tuesday November 17th. There are no details on what the ride will be, or who will get the ride. The new attraction could very well be a concept created by AMC and Sally to get the interest up.

We will be at IAAPA all next week, so be sure to follow along for this and many other announcements during the Amusement Industry’s big week!

<a href=”http://www.youtube.com/subscription_center?add_user=yaytez”>For our latest theme park videos please be sure to subscribe to us on YouTube!</a>