‘Season of the Force’ debuts at Disneyland with Amazing Attraction Overlays and Exhibits Celebrating Star Wars!

Season of the Force has finally arrived at Disneyland, along with massive crowds looking to celebrate their love of Star Wars in an immersive and fun new way and Disney absolutely delivered! We’re years away from the 14 acre Star Wars Land grand opening, so Season of the Force offers the perfect way to get your Star Wars fix as well as get your hype of the new movie. Whether you’re a fan of Classic Star Wars or a new-comer, there is something here for everyone. Let’s take a look at all of the new offerings. 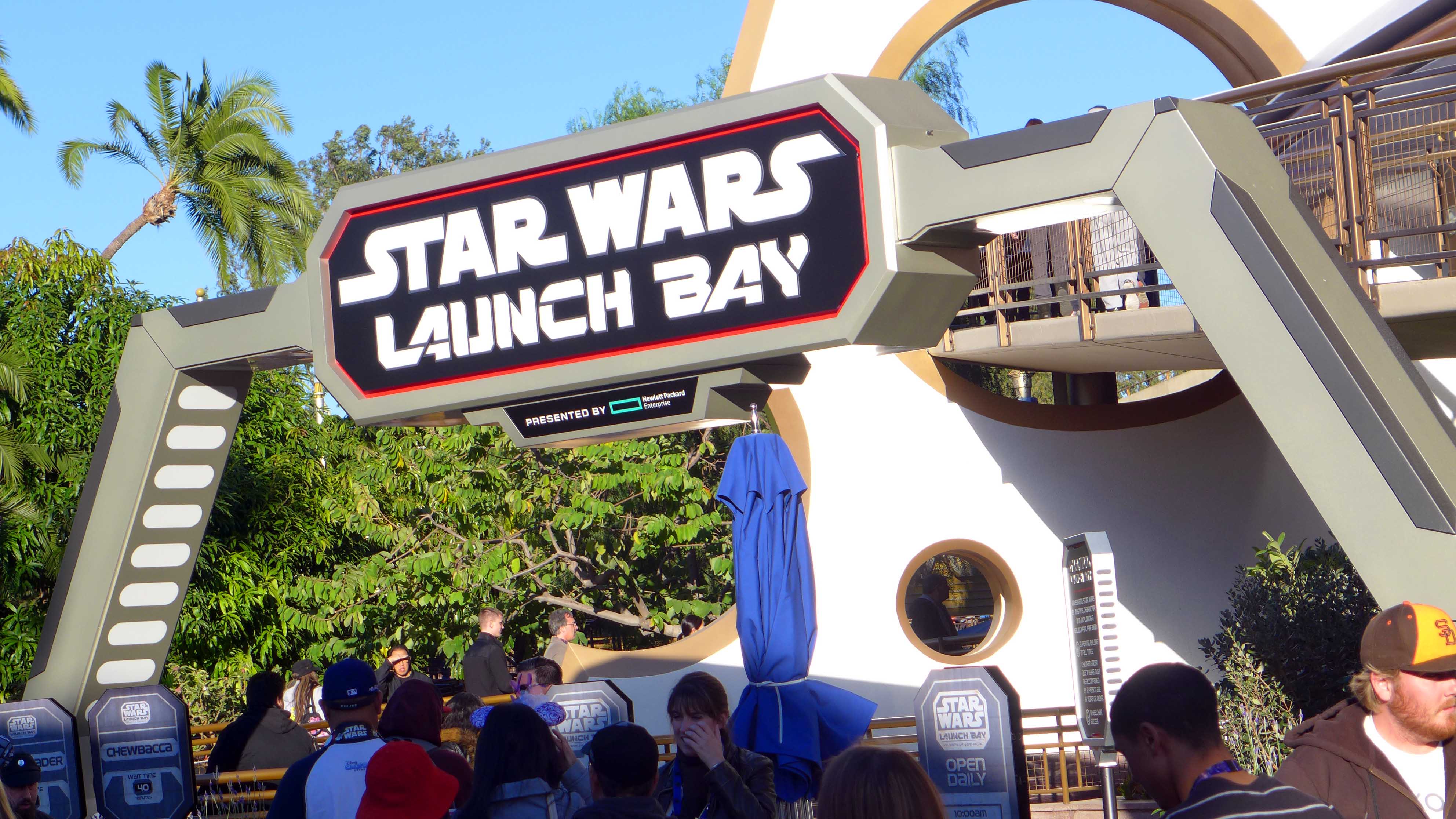 The largest addition of Tomorrowland is the inclusion of the Star Wars Launch Bay located in the lower level of the former Innoventions building. A massive interactive exhibit that showcases props and costumes from The Force Awakens, as well as explore the many ships of the saga and meet with some of your favorite characters. When you first enter you’re directly tossed into a room that screams Star Wars. The meet and greets will be some of the longest lines you’ll wait at the event. Ranging from 120 minutes to 40 minutes depending on what time of the day you arrive. 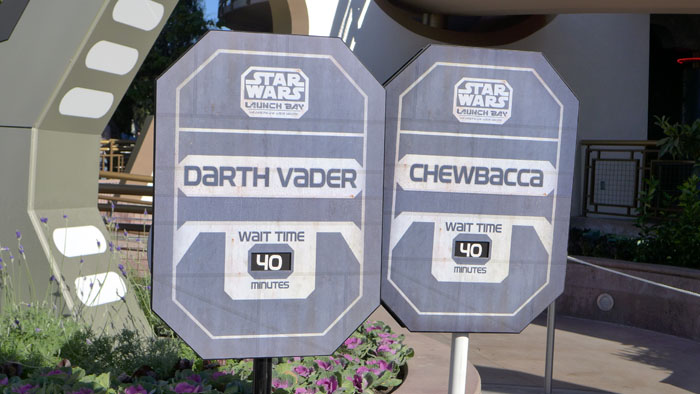 Explore the world of Star Wars in the Launch Bay Tour!

Once inside the first room is split in half, featuring the Rebels/Light Side and the First Order/Dark Side. A very common motif seen throughout the event. 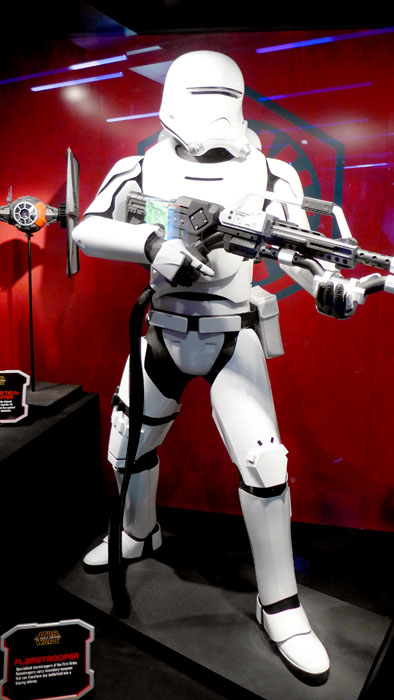 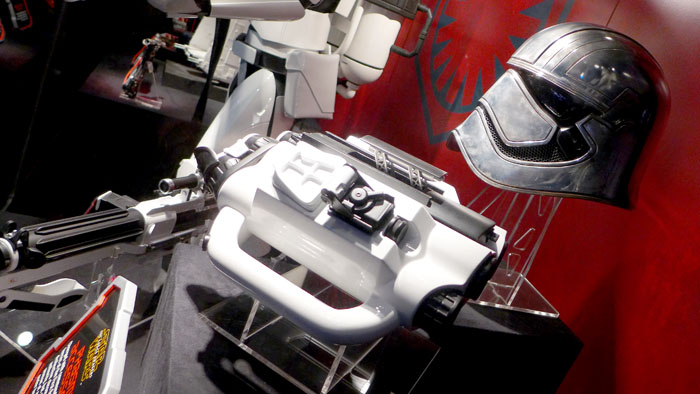 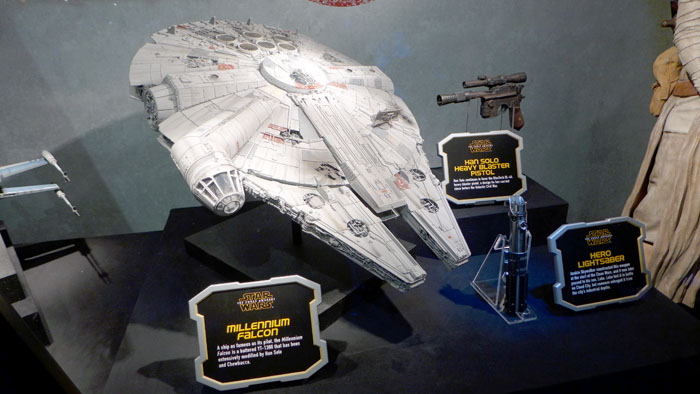 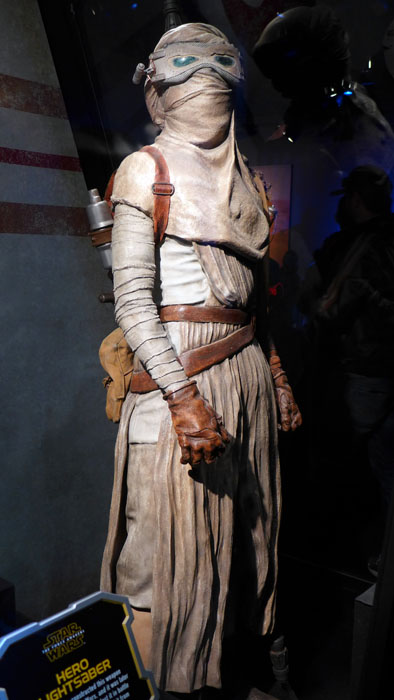 A full replica of Rey’s Speeder-bike can also be found near the entrance. This is like the same prop seen at Star Wars Celebration and many other events. 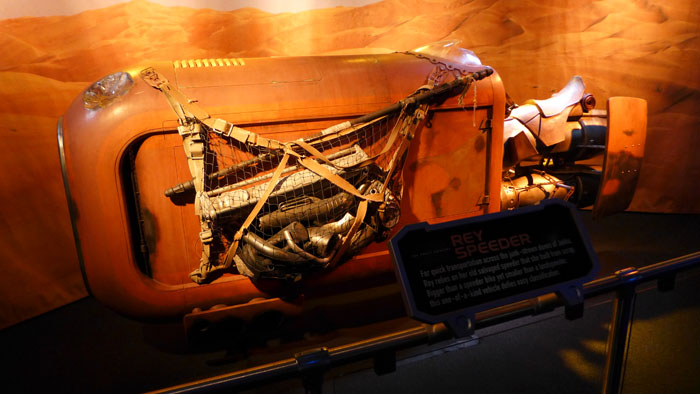 One of my personal favorite exhibits is the Ships of Star Wars, dedicated to all the amazing designs seen through the saga. This exhibit features models skillfully and accurately recreated for the Star Wars Launch Bay. I could look at these models for hours on end admiring the detailed work that craft that went into creating them. 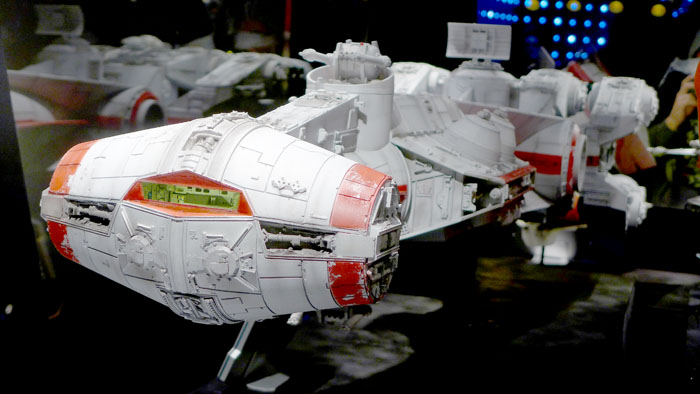 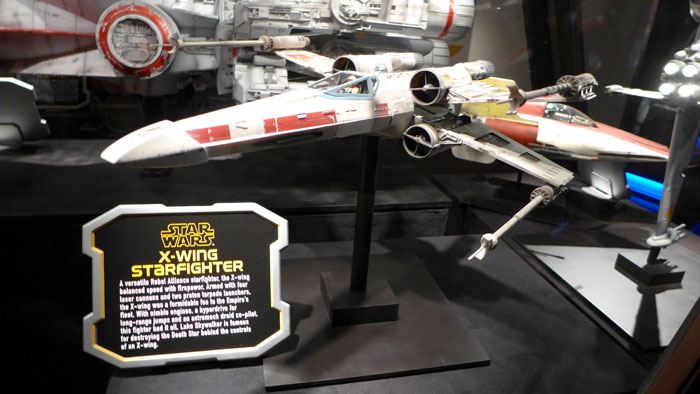 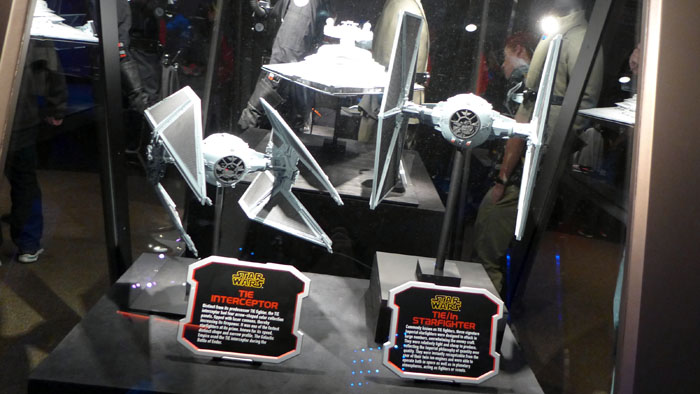 A very small display case dedicated to the Clone Wars/Prequel trilogy. In fact, this is the only thing in the entire Launch Bay that acknowledges the Prequels. 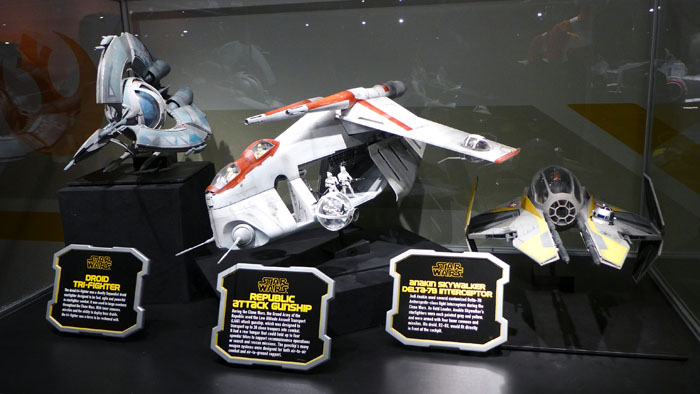 Elsewhere you can meet Chewy and Darth Vader, as well as interact with Boba Fett in the Mos Eisley Cantina. Each meet and greet is themed to the respected character. Dark is in a very imperial looking room, and Chewy is found in a room that hearkens to Yavin 4. 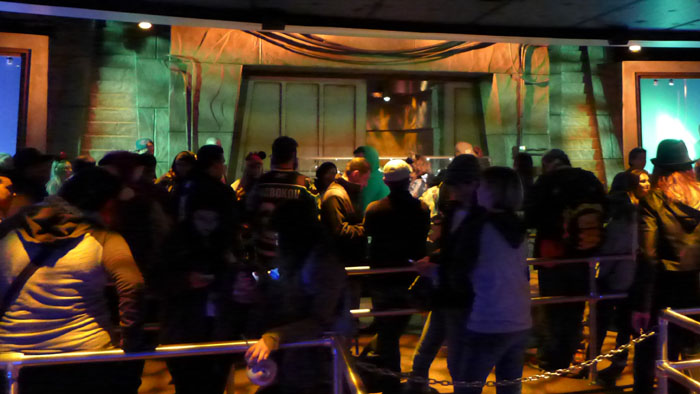 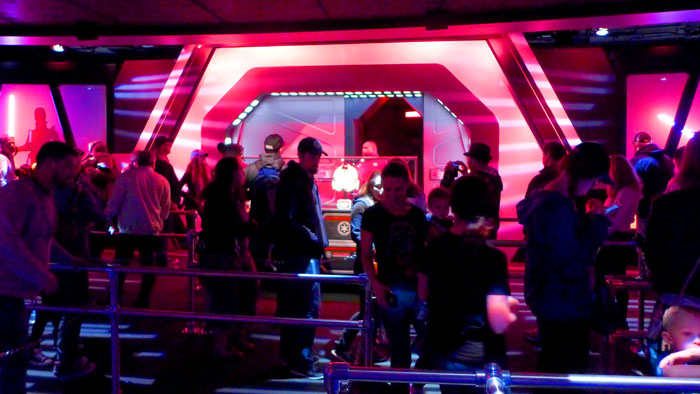 There is also a massive retail space deticated to high-end Star Wars collectibles. But we’ll take a look at that in a later article. The Star Wars launch bay is amazing. You can spend an entire day in the space just admiring the love that is going into the new films as well as the cherished memories of the past trilogies. A must do!

For a more indepth look at each model and prop on display, be sure to check out our photo gallery of the Launch Bay below! 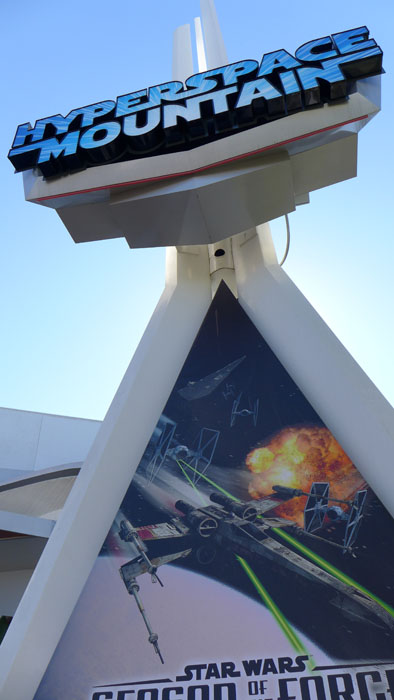 Everything about Hyperspace Mountain is wonderful. It does so much to add to the experience of Space Mountain. Each train that returned to the loading station was full of cheering fans and regular guests a like. The consensus is in, this overlay is a hit. You must do it. Though the lines can be very lengthy as this takes a fan favorite attraction and makes it an even more desirable target for early guests. Wait times ranged from 50-120 minutes during my visit. I waited about 80 minutes for the attraction and it was completely worth it. 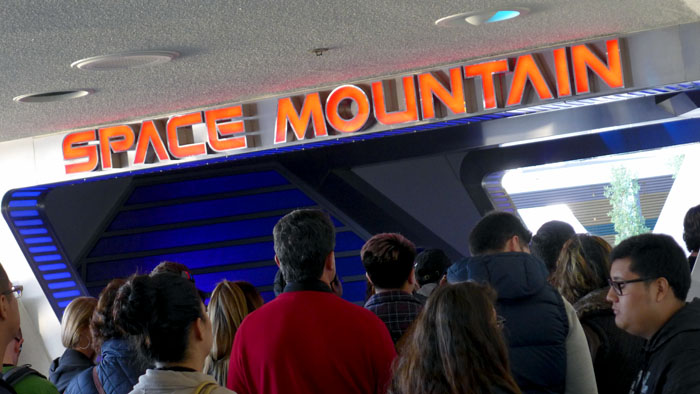 There are no visable differences to the queue until you enter the show-building a hear Admiral Akbar giving a safety spiel. The preshow videos have all been updated to look like their being holographically projected. A fitting but unnecessary change. The ride takes place between the Original Trilogy and the New Trilogy as you’re flying high above the planet of Jakku and your mission is to intercept and eliminate a Star Destroyer (the downed one that is seen in the trailer?) 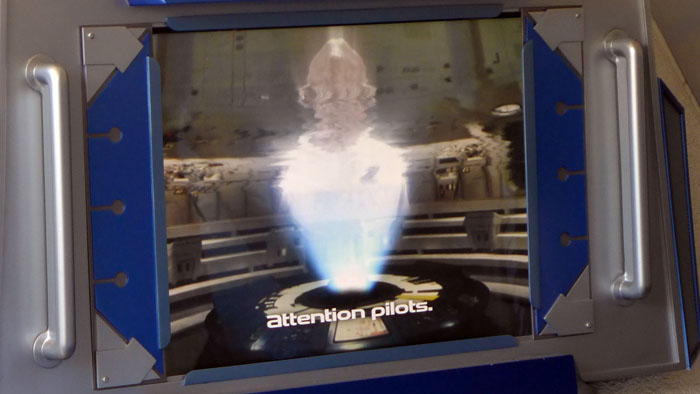 Inside the loading station is also the same but the video played in the viewport now shows the ships of Star Wars in a schematic like HUD display. 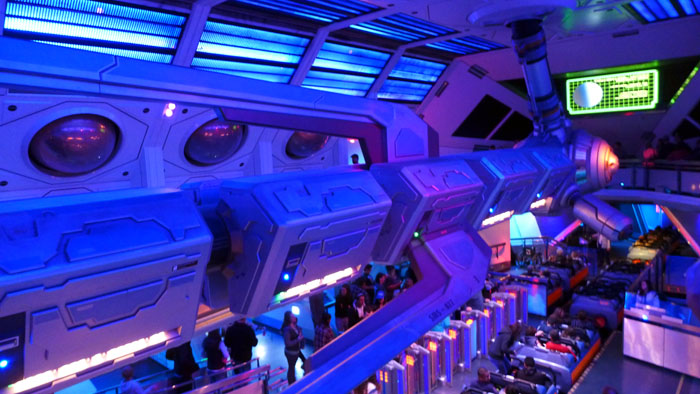 Star Wars: Path of the Jedi 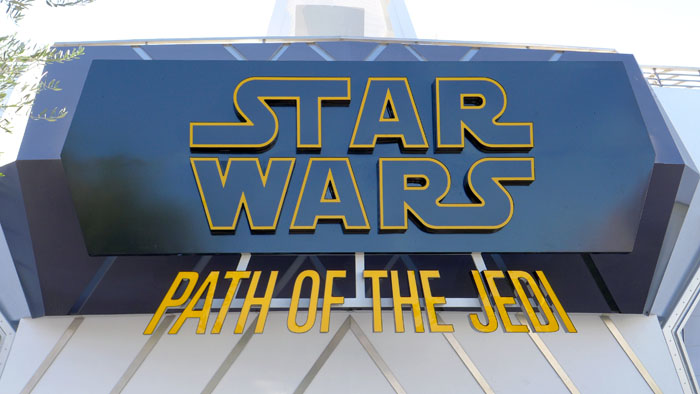 What was originally planned to be 10 minute long preview of Star Wars: The Force Awakens became Star Wars: Path of a Jedi when JJ Abrams refused to give Disney permission to show any footage before the movie came out. That is not necessarily a bad thing as fans of all ages are sure love it. It’s essentially an emotionally driven 10 minute edit recapping Episodes 1-6 and setting up the story for The Force Awakens. It’s sure nice to finally see The Force Awakens on the big screen. 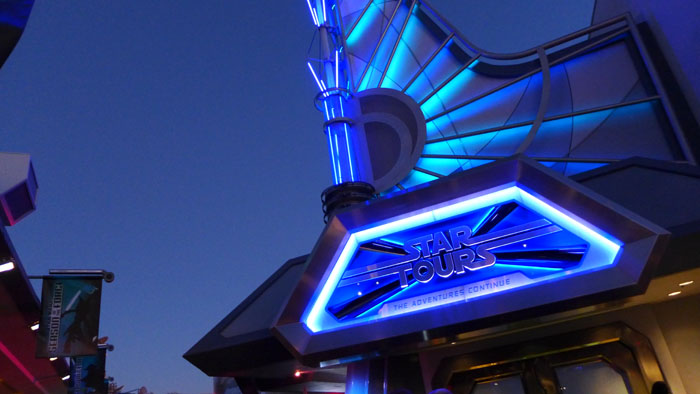 Star Tours is mostly the same but with the addition of two new characters from The Force Awakens, Finn and BB-8. Finn can be found on the left side monitor and BB=8 comes in through the mid potion of the attraction via hologram (in the spot of Leia, Yoda, Akbar). The new scene added from The Force Awakens takes place on Jakku as you fly along side the Millennium Falcon and avoid the First Order. Without spoiling too much the new addition is very fitting and feels right at home with Star Tours.

Avoid the First Order on Star Tours! (the ride is in 3D so there is some blur)

Outside you just may run into a few First Order officers. These new characters utilize brand new screen accurate costumes and are fully interactive with guests. They are almost always surrounded by folks looking to take pictures as you’ll see in the video below!

Tomorrowland is lit brilliantly at night during Season of the Force, hopefully a sign of things to come for a brighter Tomorrowland once Star Wars has moved to the 14 acre land. 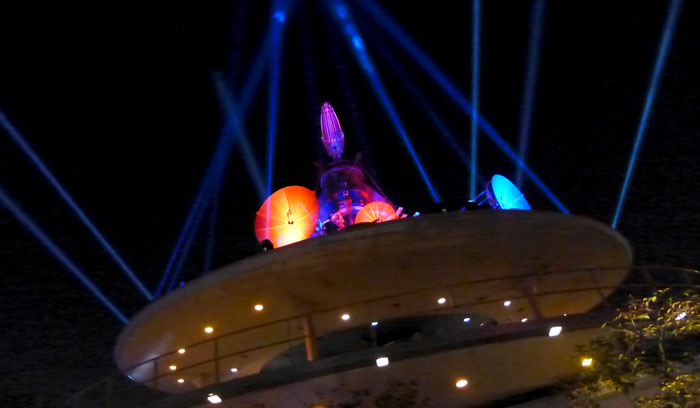 Choose your side, Rebels or Empire. 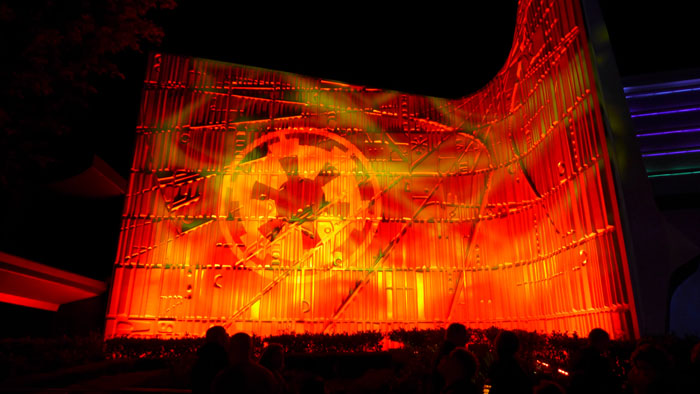 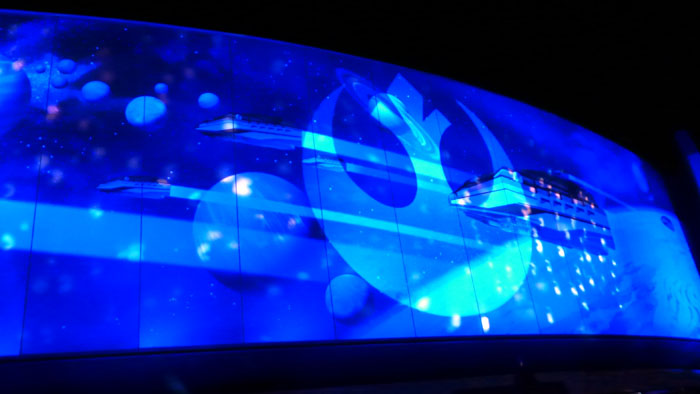 Walk-thru Season of the Force at Night!

It’s without saying that Season of the Force is a must do for all west-coast based Star Wars fans. It allows fans to dress up as their favorite Star Wars characters and celebrate the things they love most about one of the greatest film series around. For the longest time west coast fans wanted a Star Wars Weekends of their own and at long last we finally have it. If you’re excited for The Force Awakens this will only make you that much more excited and proud to be a Star Wars Fan. Disney did an excellent job respecting the classics and introducing us to what is to come.

A slightly different version of Season of the Force is also expected to open in December at Disney’s Hollywood Studios in Orlando.