We’re just a few short months until the grand opening of The Wizarding World of Harry Potter at Universal Studios Hollywood and the hype-train is entering the station. Today, Universal Studios Hollywood announced a new video series that will tour the many attractions of the new land starting with the shops and eateries that will be found in Hogsmeade Village. 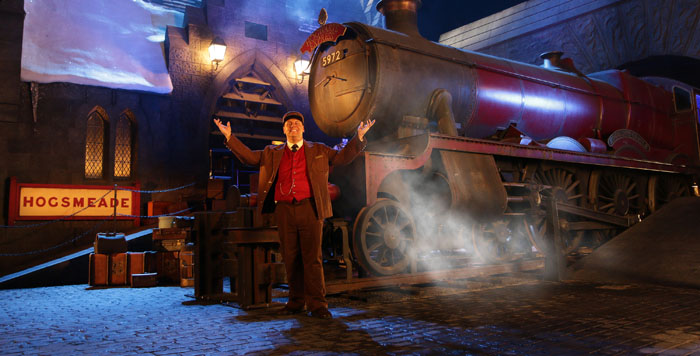 The video, hosted by the Hogwart’s Express conductor, takes you through iconic locations such as Ollivander’s Wand Shop, The Three Broomsticks, as well as Honeydukes and much more. You can watch the full video below.

More videos and news is expected to come out leading to the grand opening of the land, and we’ll be sure to bring you the latest.

In additional to all the new shopping and dining experiences, the new land will feature two new attractions for Hollywood, including Harry Potter and the Forbidden Journey, in 3D for the first time in the United States as well as Flight of the Hippogriff, an all-new family coaster in which guests have tame the magical beast before they can ride.

Are you as excited for Harry Potter at Universal Studios Hollywood as us!? The Wizarding World of Harry Potter is expected to open in Spring of 2016.

Stay tuned for more from Harry Potter and Universal, and be sure to get social with us on Facebook and follow along with us on Twitter @BehindThrills for the latest updates!
For our latest theme park videos please be sure to subscribe to us on YouTube!