Beetlejuice closes at Universal while Fast & Furious Supercharges in!

Say it once, say it twice, the third times a charm, however the charm will not work anymore. On Tuesday, Beetlejuice and his gang of “monsters” hit their last note, and whipped their last nae nae as the show closed for good at Universal Studios Florida. The park did not waste any time, however, as work seemed to immediately begin on Fast & Furious: Supercharged. The long running show bid a fond farewell, with flocks of fans coming to see the final performance. 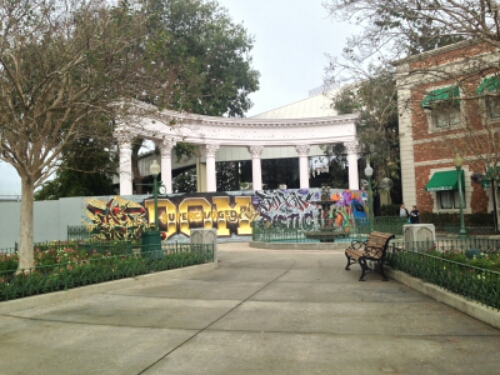 Fast & Furious Supercharged will not open until 2017, but the park has already closed two attractions to make room. Late last summer, Universal closed Disaster forever and finally closed Beetlejuice this week. The very next day, guests arrived to see graffiti covered construction walls, which mark the coming of Dom Toretto and his crew from the Fast and Furious franchise.

The attraction has already made it’s debut in Hollywood last year, as part of the Studio Tour. The reviews on that portion of the tour have been mixed, but the attraction has still helped to draw huge crowds.

Beetlejuice originally premiered at both Universal Studios Florida and Hollywood in 1992. The show has been seen in various forms since opening, but largely remained the same. Changes in songs, costumes, and some characters have been the main changes throughout the years, but the crass humor of Beetlejuice has pretty much stayed the same. The latest update happened in 2014, and brought in Fantasia (the Phantom of the Opera’s daughter) and Cleo (instead of the Mummy).

As the end drew near, fans wrapped all the way down the street in huge lines. The park opened the final show to passholders, and gave them a chance for tickets to the show.

There have been rumors that Beetlejuice could return to a different venue, but so far that doesn’t look to be the case. The park has brought in three new shows that play in various locations in the park throughout the day, to help with the absence of Beetlejuice.
Fast & Furious Supercharged opens in 2017, along with Jimmy Fallon’s Race Through New York.