Celebrate ‘Year of the Monkey’ with Curious George and Mandarin Speaking Megatron at Universal Studios Hollywood! 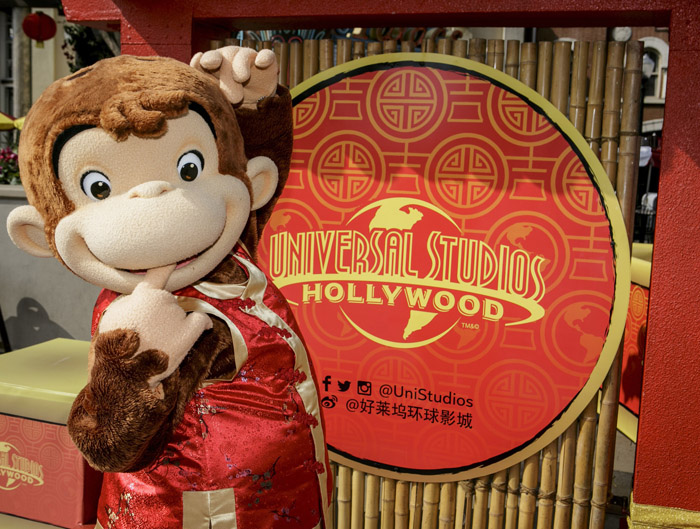 Lunar New Year comes to life within Universal Plaza, a grand courtyard situated at the heart of the theme park, where guests will be ushered in to celebrate the “Year of the Monkey” under a curtain of customary red Chinese lanterns and a stunning plum blossom arch.  The polygon-shaped piazza will also display a dozen lampposts each featuring banners of the twelve zodiac animal signs along with three symbolic attributes.

A highlight of the time-honored tradition will feature the annual appearance of a Mandarin-speaking MEGATRON who will engage guests in conversation characteristic of his DECEPTICON TRANSFORMER’s persona.  MEGATRON – an ominous 12-foot-tall figure – is one of the stars of Universal Studios Hollywood’s award-winning thrill ride, “Transformers: The Ride-3D” designed to immerse guests in the 3D action-packed robotic world of the TRANSFORMERS.

Unique to this year’s Lunar New Year celebration, Universal Studios Hollywood will welcome an exciting Shenzhen performance. “The Five Continents Arts Troupe” from Shenzhen, China entertainment will take place periodically throughout the afternoon for one day only on Saturday, February 13.

In honor of this multi-cultural celebration, favorite Universal character, Curious George will dress in festive attire to meet guests and take photos in front of a traditional Chinese gong.  Asian-inspired treats along with customary music resonating throughout the Plaza will help commemorate another memorable Lunar New Year.