The massive restructuring of Disney’s Hollywood Studios continues as the Walt Disney World Resort has officially announced that they will be officially owing the Lights, Motor, Action stunt show for good on April 2nd. The move has been rumored for a while, but officials announced it Friday. 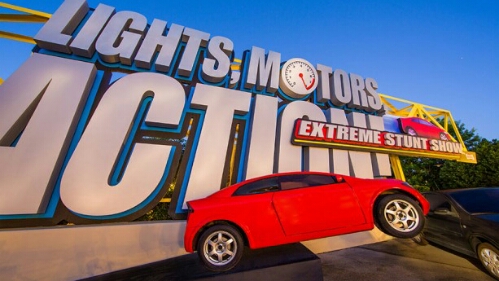 The show originally opened at the Walt Disney Studios Park in Paris, France in 2002. A copy of the show then moved to Orlando in 2005, and has been a fixture ever since.
The show is closing to make room for the massive expansion in the park which will include a new Toy Story Land, Star Wars Land and possibly a Muppets mini land. The park has been closing many classic attractions to make room for new ones, and expanding existing attractions. Late last year the park opened the all new Star Wars Launch Bay,  and introduced an all new Star Wars based fireworks show.
Later this year the park will open an expansion on the park’s massively popular Toy Story Mania. In December the park also ended the hugely popular Osborne Family Lights after 20 years.

There’s been a big update on more closures at Hollywood Studios, most of which will happen on April 2nd. It includes a large portion of the park near Lights, Motor, Action, all of which should serve as a the base for the new Star Wars Land.

In addition, Disney has confirmed that the iconic Earful Tower will be coming down. The tower has been the main icon (besides the sorcerers hat) for the park that has been used in advertising, and as the main focal point of the park. Of course, it wasn’t readily visible from the majority of the park. It was most visible on the Backlot Tour which closed in 2015.

While many have been complaining about the park not having many attractions still open, the park still has Star Tours, Rock n Roller Coaster, Tower of Terror, The Great Movie Ride and Toy Story Mania up and running. With the new editions coming with Star Wars Land and Toy Story Land, the park will almost double in the amount of attractions that it had. It will also increase the number of actual rides that the park had. Keep in mind that the majority of the attractions that have closed have not been rides, but shows and walk through attractions. The park also seems to be right on target to change themes from the working movie studio that originally opened in 1989, to a park themed to a general “Hollywood” theme where guests can step into worlds that originate in Hollywood. The rumored name of the new park is said to be “Hollywood Adventure” and will be allegedly revealed once the opening dates for Star Wars Land and Toy Story Land gets closer. With the big picture of the park in play, don’t be surprised if more closures happen to make room for even more attractions and additions.