Feld Entertainment retiring elephants early-Could this be a clue to the Disney buyout rumor?

Today, Feld Entertainment made a huge announcement. Instead of retiring their world famous Ringling Elephants in 2018, the circus will end the elephant shows in May. This is a huge departure from the previous announcement. The company cites the fact that they were able to build the enclosures at the elephant sanctuary a little faster than previously thought, but could there be another reason why the move is happening quicker? 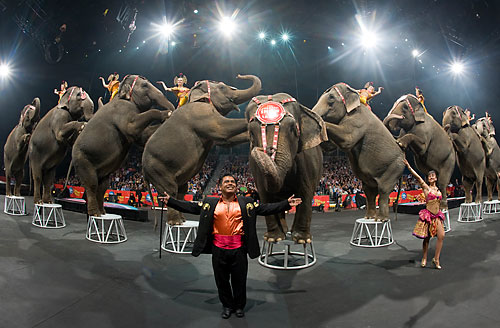 On Monday, Ringling Brothers Circus and Feld Entertainment announced that it will be ending all traveling elephant shows in May. Previously, the company announced that they will be ending the shows in 2018. The end of the shows are largely in response to new legislation passing in the cities that outlaw the shows. The local ordinances have been put into place due to a lot of pressure from animal rights groups.

The elephants will be retired to the Center for Elephant Conservation, a 200 acre facility in between Tampa and Orlando. The original plan was to have the shows end in 2018, but according to the company that plan was pushed forward when construction was finished early.

Last year we also told you about a rumor that Feld Entertainment would be purchased by Disney. Today our sources say that the reason for the early end on the elephant shows is that Disney is looking to push through with the acquisition later this year. The announcement will likely happen during the summer, or right at the beginning of the new fiscal year in October, if this rumor is true.

Feld and Disney already have a long running partnership with shows such as Disney on Ice and Marvel Live. The new venture would mean that Disney would have full control of the shows, as well as Ringling Brothers. There’s even a rumor that could put a permanent Ringling Brothers show in Disney Springs some time in the future.

As for the elephants, they will be studied in cancer research, as elephants rarely get cancer.