While many fans have been sad to see Walt’s original vision and layout of the Rivers of America leaving, the morning after the start of the lengthy 17 month closure, Disney Imagineering released a stunning piece of concept art for the truncated new route, and it’s everything we could have wanted!

Taking a closer look at the concept art we can see a few obvious new changes. The addition of a brand new bridge and waterfall section, as well as the relocation of the Indian village.

As part of an ongoing, planned expansion at the Disneyland Resort in Anaheim, Calif., the Rivers of America at Disneyland Park will receive a brand-new waterfront, just outside the location of the new Star Wars-themed land. The new riverbank will also feature an elevated trestle over which the iconic Disneyland Resort Railroad will travel. (Disney Parks) 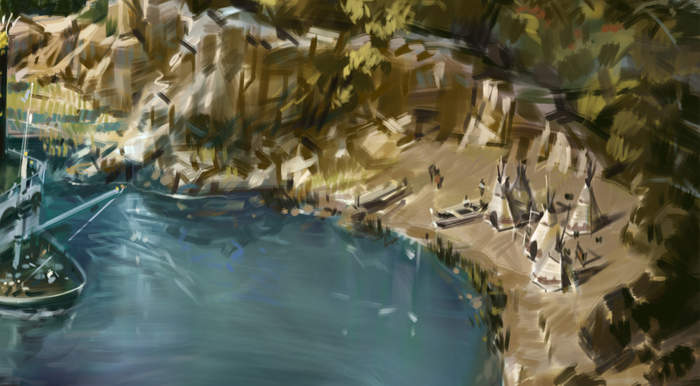 In addition to the Rivers of America being closed, Fantasmic will go on hiatus, and the Disneyland Railroad will also not operate. A representative from Disneyland has confirmed that while the Mark Twain and Sailing Ship Columbia will not be in daily operation, there will be limited time opportunities that will feature them in the near future. Disney has also confirmed that all the water craft including the iconic canoes will return when the river reopens. At the moment not much else is known, and the artwork is vague, the Rivers of America is expected to reopen with all of these new changes sometime in Spring 2017. Has this artwork eased the impacted of the river being shortend? What are your thoughts on the new changes being made to Fronteirland in order to accommodate Star Wars Land?

For more information about Star Wars experiences at Disneyland as well as ticket information, be sure to click here!

Stay tuned for more from The Disneyland Resort as the park enters its largest expansion ever.  Be sure to get social with us on Facebook and follow along with us on Twitter @BehindThrills for the latest updates!