It was a weekend of celebration and fun at Universal Orlando, but a weekend with a subtle hint of sadness as the Harry Potter community came together for the first time since the death of Alan Rickman. Rickman played Professor Severus Snape in the Harry Potter series (among many, many other amazing roles), and brought a touch of sadness and humility to the character, with a searing intensity that most actors couldn’t pull off. Universal Orlando also paid tribute to the potions master, and the cast spoke fondly of the actor. 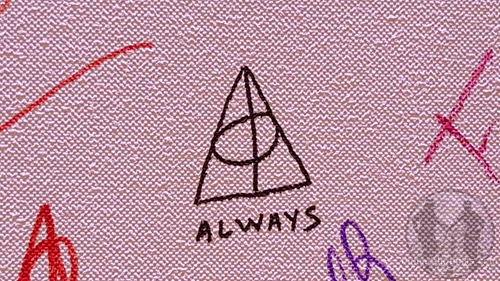 The presence of Snape could be felt everywhere, from fans in cosplay to even the walls of the Harry Potter Expo where fans expressed their love for the professor.

Fans even gathered in the London section of the park to pay tribute to Alan Rickman with a raise of the wands.

Video-Alan Rickman Tribute (Video courtesy of Inside the Magic)

Fans weren’t the only ones who spent time over the weekend remembering the actor, as the young actors who grew up with Professor Snape on set even shared their thoughts and remembrances with us.

Universal even started off their celebration with a huge tribute to Professor Snape, which was met with raised wands and cheers from the huge crowd of fans.

The actor was definitely a class act, which could be felt all throughout the Celebration. It wouldn’t have been the same without his involvement. He will be sorely missed.