Walt Disney World is rolling out the red carpet at Disney’s Hollywood Studios for Star Wars fans this Spring, as the park has just announced an all new Star Wars show, new characters, and a new fireworks show. To say that the Force has Awakened is a bit if an understatement. The new line up comes just as the park is gearing up to close several attractions, all to make room.for the biggest expansion in park history! 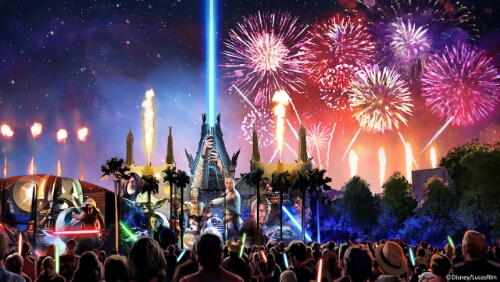 Star Wars is awakening in a big way this spring at Disney’s Hollywood Studios, as the park is unleashing two huge new extravaganzas. First, beginning April 4th the all new show “Star Wars: A Galaxy Far, Far Away” will premiere, and bring guests into the world of Star Wars in a big way. The huge show will take place in front of the Chinese Theater, and will feature appearances by Kylo Ren, Chewbacca, Darth Vader and Darth Maul. It will play out key moments from the Star Wars films.
Also on April 4th, the shiny Captain Phasma will begin marching her garrison of First Order Stormtroopers from Launch Bay to Center Stage multiple times a day.

Then, this Summer, an all new fireworks show will blast off into the night as  “Star Wars: A Galactic Spectacular” combines fireworks, music, special effects and projection mapping to being the park into a whole new Galaxy. Guests will see the dual sunsets, rush through the trenches of the Death Star and more!
It’s shaping up to be the year of the Force at Walt Disney World!