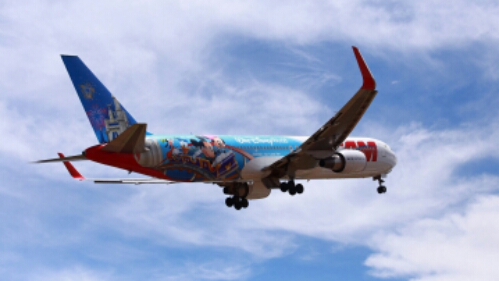 The airline is the first to have a Disney themed wrap in Latin America, and will be used in long distance International routes. The wrap includes all of your Disney friends, including Mickey, Minnie, Donald and Goofy on a roller coaster with Cinderella Castle on the tail of the plane.
It made it’s inaugural flight on Tuesday, arriving in Central Florida. Guests on board were treated to many Disney amenities, including Mickey Cupcakes.

Last year, the resort unveiled a Frozen themed airliner that would be used for domestic flights.