BioHazard: The Escape 2 at Universal Japan brings terror and monsters to the Escape Room concept

Universal Studios Japan is home to some really amazing attractions, and changes things up on a seasonal basis in the park. Last year, Universal Japan brought the popular BioHazard attraction to life in a big way. American audiences know it as Resident Evil. This year it’s back with an all new escape room, and we have a great look and review of the new attraction. 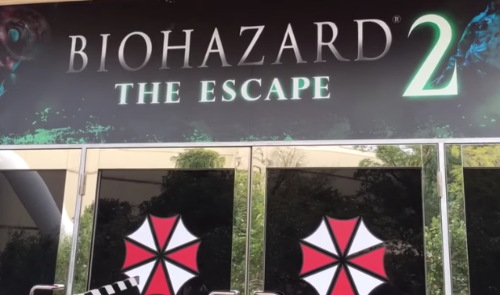 Our good friend, Scott Yuken, better known as YukenDoIt on YouTube has sent us in a great look at what to expect from the new experience:

Good Morning, afternoon, or evening depending on the time that your reading this. If you gave up reading this after the first line I’m just going to write the word BANANAS so you quickly glance through and think why did this person write the word bananas.
The truth is there is a no reason.
Now that everyone else as given up I want to talk about the actual subject, which is Biohazard: The Escape 2. Located all the way in Osaka, Japan inside of Universal Studios Japan. Biohazard: the Escape 2 is I assume the sequel to the first escape room where you have one hour to escape. It takes place in what looks like a four story rethemed office building splashed with blood with various rooms from research labs to medical rooms. Essentially, it’s a highly themed escape the room experience.
When you enter the attraction, you are put in a small group and they are your family for the next two hours. They give you a smart phone and tablet that has English, Chinese, Japanese, Korean, and a couple other languages. So it’s very accessible if you live in Asia or if you speak/read English. They also give you a map that explains the layout of the experience.  I can honestly say it is huge, many different rooms on the four levels. It’s not as easy as wondering from room to room, as some you need special access to get into. You get that special access by completing the tasks and unlocking things, just like the video games.
You are introduced to the story with a quick “presentation on the umbrella company” until something goes wrong. One of the hosts who is wearing all white gets shot. It’s pretty shocking/surpising because it comes out of nowhere, and the person actually gets shot! Okay, maybe not ACTUALLY, but the effects here are pretty convincing.  A group of counter umbrella corp.  mercs takes over the presentation proclaiming that they’ve taken the T-virus, and give it to some seemingly random guy. Of course, the guy who has the T-virus leaves the room and mysteriously dies. In true Resident Evil style, his death accidentally releases the virus through out the building. At this moment the U.B.C.S. shows up and points tons of weapons, including shotguns and handguns to the counter group. Zombies appear in the room that you are in, and the focus of their attention is now the problem of the many zombies. They have to figure out a way to push them back through the doors and getting the automatic doors shut. Then from the other side a Tyrant comes through the door and starts beating the crap out of everyone. They shoot it in front of an electrical box and open the automatic doors and push him out with the zombies with shotgun blasts as force. We are told the automatic security system is active and will blow up the building in one hour.  Hey, how lucky that’s the average time of an escape the room!
Your only hope is to find the various antidotes to the virus and escape. With that you are pushed inside of the building. You can start on any floor you like, but at the beginning only the third and first floor are accessible. The puzzles are extremely challenging, and it helps if you know your Resident Evil lore, as some of the puzzles might be easier to solve at the beginning. But, the massive difficultly curve really hits after you figure out your first five puzzles.Did I mention that during the entire ordeal, zombies are jumping out at you from all angles? This completely adds to the experience, and makes it seem more of an escape rather than just a puzzle game.
My group and myself honestly didn’t get that far into the puzzles before it was time for the “end game”. It was really really difficult. At the end of the show, you are shown all the solutions in Japanese. Man they were ridiculously complex.
It takes about twenty minutes to explain it all. You might have to have a B.A. in puzzle solving just to make it through this. But, somehow there was one winner who was allowed to escape through the exit of the attraction. The rest of us dolts were treated to an ending show were Nemesis, the tyrant, and the bad guy from Resident Evil 2 come out and wreak havoc between the U.B.C.S. and the counter umbrella group.
If you remember Halloween Horror Nights at Universal Orlando in 2013, they had a Resident Evil House. While that house was fun, and showed a great bit of detail, this was infinitely more detailed. The stand alone attraction idea works so much better than a temporary haunted house. More details can be put into costumes, and characters.
Overall the attraction was a little cheesy and at the end we all died. And the words appeared, “You are dead.” It was a kookie experience, I have no idea how you would be able to solve all these problems on your first time through. It’s worth a look, if you are in Japan and really want to do this is worth the trip. It will run about an  extra $30 bucks, but lasts about 2 hours, so it takes up a huge portion of your day, but you definitely get your time’s worth.