The Wizarding World of Harry Potter at Universal Studios Hollywood is about to have its Grand opening  in just under a month. The new area takes guests from the hills of Southern California and transports them to the Scottish Countryside where magic rules, Wizards roam and Dragons fly. The new area is the latest Wizarding World for Universal Parks, and like all of them, the parks will roll back the curtain in style, and with huge celebrities, including the legendary John Williams. 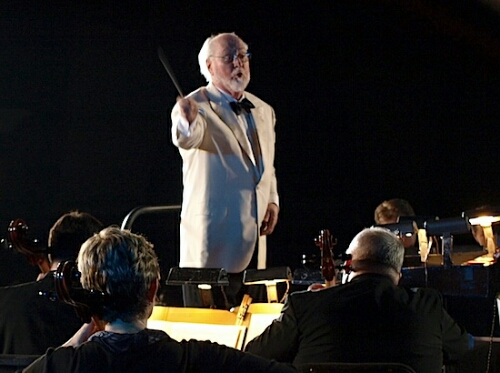 John Williams conducts the Orlando Philharmonic at Universal Orlando in 2010

According to Pottermore, the guest list for the premiere of the Wizarding World Hollywood has been set and it includes a ton of the Harry Potter cast as well as the legendary composer of the film series, John Williams.

Warwick Davis, Tom Felton, Evanna Lynch, James Phelps and Oliver Phelps will walk the Red Carpet on April 5th as the huge world premiere takes over Universal Studios Hollywood.
John Williams, who made the Harry Potter films more iconic with the instantly recognizable Hedwigs Theme will also be present. There’s no word if he’ll be conducting, but fingers crossed that he does.

The new fully immersive area takes guests through the iconic Harry Potter landscape, and into the story like never before.

Guests will be able to journey with Harry Potter through the iconic Hogwarts Castle, sip Butterbeer and even get chosen for a wand.