Kool & The Gang boogies to Universal Orlando this weekend!

Time to get up with the get down. This weekend at Universal Orlando, the massive legendary group Kool & The Gang will be performing! The legendary group will be on hand this weekend as Mardi Gras rolls through with more food, more music, and more beads than you can handle! 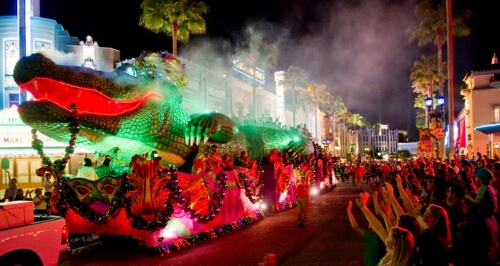 Having performed continuously for more than 40 years, longer than any R&B group in history, Kool & the Gang has three generations worth of worldwide musical influence. The group has earned two GRAMMY Awards, seven American Music Awards and 31 gold and platinum albums. Kool & the Gang is best known for its party anthem, “Celebrate,” as well as smash hits “Get Down On It,” and “Jungle Boogie.”

Here is the remaining line up of Mardi Gras Concerts. All concerts are included with theme park admission, and are on the Music Plaza Stage.

In addition to the huge concert, guests can also catch tons of beads from the massive Mardi Gras Parade, which features five all new floats this year! Check out all the floats and highlights in our video below!