The king, is returning. For the all new Skull Island: Reign of Kong attraction, the task of seeing the King of the jungle is a big adventure. A big adventure requires a big mode of transportation, so Universal has unveiled the massive new cars that will take guests into the depths of Skull Island! 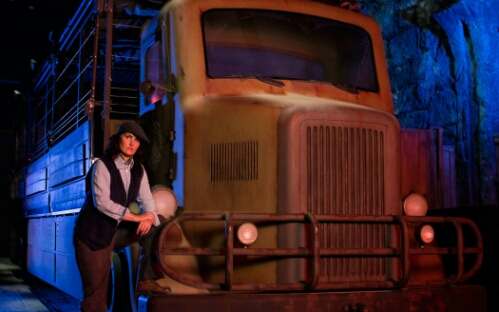 The new ride vehicles are massive. They are 40 feet long, 13 feet tall and seat 72 people at a time. They use a trackless system, and will take guests on a journey like never before.

As the video describes, there will be five different tour guides, all of whom have a story to tell.
Becky Callahan: The loose-cannon cowgirl who isn’t fazed by the dangers awaiting her on Skull Island.
Will Denham: The fresh-faced, adventure-seeking younger cousin of famed movie director Carl Denham.
Jinks Costanza: A hardened New York City ex-con who is wary of the island’s mysteries.
Kalana: A mystical descendent of the natives who first settled on the island.
Charles “Doc” Jordan: A PhD student in paleontology who took time off from his studies to explore the world.
The new characters are rumored to be animatronic, and could meet an unfortunate
end somewhere along the way. The new attraction roars to life later this summer at Universals Islands of Adventure!