Exciting news coming from Universal, as fans have spotted the all new ride, Skull Island: Reign of Kong testing. A new video gives us our first real good look at the ride vehicles, plus a glimpse inside. With the ride testing, does that mean we can expect soft openings real soon? We’ll see, but first lets’ take a look at the new attraction.

In a new video from Mako Madness, we get a really good clear look at progress being made on the all new Reign of Kong attraction.

Check out the video from Mako Madness:

What do you think? We get some pretty clear shots of the new vehicle, and even a peak inside as the ride enters the building.

It looks like the first thing guests will see inside is the huge head of a giant something or other. This is only one of what we hope to be many set pieces that the ride will see, as we go on an expedition into this forgotten land. 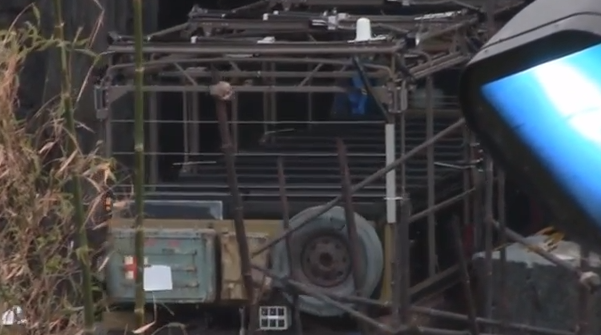 While it definitely seems like the video has a hard time getting a look at the front of the vehicle, it definitely gives us a good glimpse at the back of the vehicle. We see the style of attraction, and we see just how we’re going to get into the depths of the jungle. The ride vehicle looks very reminiscent of the Hollywood style trams. This is important, because it was Hollywood where the first new King Kong attraction premiered. King Kong 360 took guests on a tram tour of Skull Island, where they are attacked by King Kong and several dinosaurs. This attraction is said to use that final film, but add to it with new experiences and set pieces. It certainly looks like we’ll get a very similar attraction, just based on the massive ride vehicles.

Now, with the first testing of the vehicles, it doesn’t mean that a soft opening is right around the corner. It does mean that it’s getting closer, and that we should hear an official opening date very soon. We’ve been hearing that soft openings could happen as early as the end of this month, but as late as the end of April. Still the ride isn’t scheduled to open until Summer, so it could be well into June before we see anything at all. So it’s very hard to say. We’ll have to keep checking to find out.