In just a few weeks, more than 500 athletes, all comprised of injured soldiers, from around the world will come to Walt Disney World for the 2016 Invictus Games. The games will celebrate the human spirit, and those who never give up, despite injury, illness and overwhelming obstacles. We now have a look at what the opening ceremony will look like, including a list of some of the celebrities who are scheduled to appear. 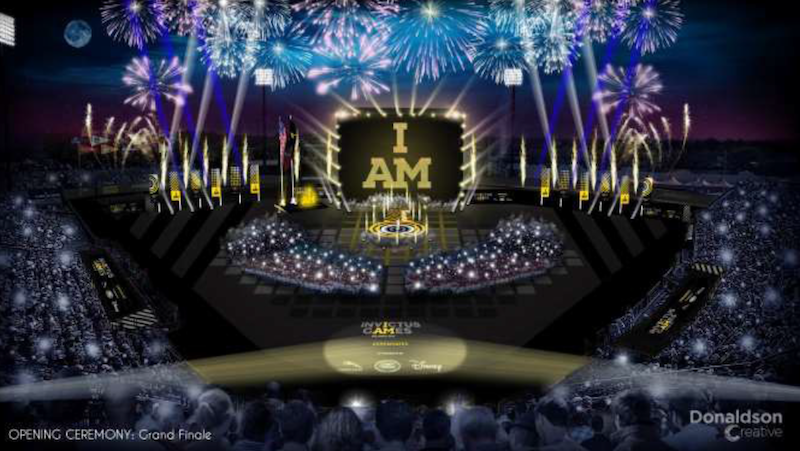 The opening ceremony, Sunday May 8th, will be held at Disney’s Wide World of Sports. The ceremony will feature the athletes, and their families, as well as a 30 minute performance from British Singer James Blunt. Blunt is an active duty member of the British Army, and does tours with the British Forces Foundation. Also performing will be Laura Wright, who will be joined by a 20-person chorus from the U.S. military. Scheduled to appear will be First Lady Michelle Obama, as well as Prince Harry, who founded the Invictus Games in 2014. Also scheduled to appear are Dancing With Stars’ own Shawn Johnson and Derek Hough.

The ceremony will be feature military helicopters, as well as a flyover by two Navy F/A 18C Hornet fighter jets . The U.S. Army Herald Trumpets, the U.S.  Army Band, the Army Old Guard Fife and Drum Corps, and the Marine Corps Silent Drill Platoon will all also perform. The finale will feature a 250 person chorus, made up U.S. active duty, Guard or reserve, retired or veterans.

There’s bound to be more information released as the dates get closer, so stay tuned!