We are finally going to see it happen! It’s been almost eight months since Star Wars Land was officially announced at D23, but it appears that Disneyland and Disney’s Hollywood Studios are about to have an official groundbreaking. The Official Disney Parks Blog teased an image showing off BB8 taking a peek at something that is coming very soon. Whatever could it be? 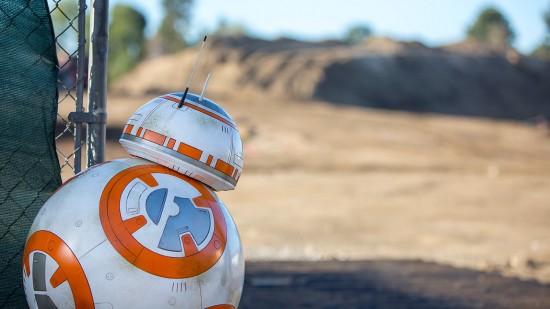 The new image shows BB8 peeking behind a construction fence at a blurry pile of dirt. Soon that dirt will make way, and we’ll start to see a Galaxy far, far away emerge from the dirt piles.

There are no opening dates, but rumors suggest that the attraction could be ready as early as 2019, just in time for the final movie in the current trilogy. So far the new Star Wars films have been met with critical claim and box office success. The Force Awakens smashed box office records, and is currently the top film at the domestic box office. The film just hit Blu-Ray today, and digital download Friday, where it will sure break even more records. There is a Star Wars Spinoff film hitting theaters this December as well, with Rogue One. The film will tell the story of the team that steals the plans to the Death Star. Many Bothans will die to see that film.

The new land will feature two huge new attractions, including the chance to pilot the Millennium Falcon and the chance to do battle with the First Order.

Watch all the details from Disney’s D23 Expo: