You gotta love Orlando! You’re driving down the highway on your afternoon commute, look up and there’s a bunch of viking ships on the back of a flatbed truck. That was the case today as our old friends from The Coaster Crew spotted what can only be boats for the new Epcot ride heading down the highway. In case you haven’t heard the ruckus over the past few years, Frozen in coming to Epcot, and it’s opening very soon! 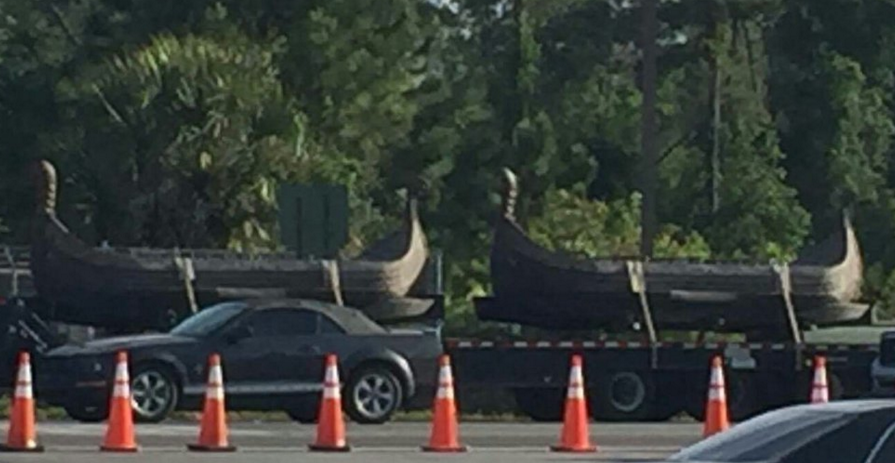 The Coaster Crew tweeted out the picture from their account, showing off some of the boats from Frozen heading towards Walt Disney World.

The Frozen ride will take over for Maelstrom at the Norway Pavilion in Epcot’s World Showcase. The new ride will feature animatronics, music and Olaf. We’re not sure how much of the ride will be just an overlay of Maelstrom, but this looks like they’re using very similar boats.

Here’s a look at the boats from Maelstrom as they are towed away from Epcot:

There’s not that big of a difference between the two boats, besides being new.

What does this mean for the opening of Frozen at Epcot? It looks like the vehicles are just now arriving on site, so testing should be happening very soon. As far as opening, we are hearing that pretty much all of the new things happening this summer will open on June 16th, the day that Shanghai Disney is opening. Of course, that’s just rumor at this point, and we have no sure way of knowing. There will be a media event later this month at Walt Disney World, so we are sure to hear something about opening dates real soon.