To say that Star Wars is back in a big way is huge understatement. The Force Awakens has recently hit Blu-Ray and digital downloads, and will more than likely break records. However, this Christmas, fans will be able to go back to a Galaxy far, far away with the first in what is planned to be many “Star Wars Stories”. And now, Disney and Lucasfilm has released the very first look at footage from Rogue One. 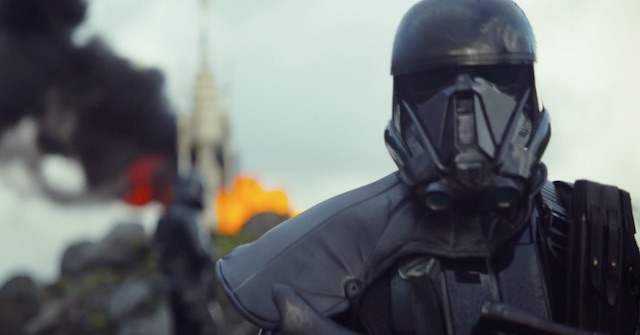 The full trailer hits tomorrow on Good Morning America, but today Disney has a teaser for the trailer…kind of the trend in movies these days.

“Rogue One takes place before the events of Star Wars: A New Hope and will be a departure from the saga films but have elements that are familiar to the Star Wars universe,” said Kathleen Kennedy. “It goes into new territory, exploring the galactic struggle from a ground-war perspective while maintaining that essential Star Wars feel that fans have come to know. Gareth is such an innovative director and I’m so excited to be working with him and the extraordinary ensemble cast he’s selected for ‘Rogue One.’”

The story, if you haven’t heard by now, tells of the rebels plans to steal the original Death Star plans. Many rumors suggest that Darth Vader will make a big screen return to the film. It’s also described less as a Star Wars film, and more like a heist film with heavy Star Wars themes. It should be a fun ride, regardless.