Star Wars is back and bigger than it ever was. The new film is only the first star in the new galaxy, as we’re getting new films yearly. There’s also a new theme park attraction that they’re building at some place with a mouse. Ever hear of it? Today a few more details have been revealed, including what looks like first footage of a new ride! 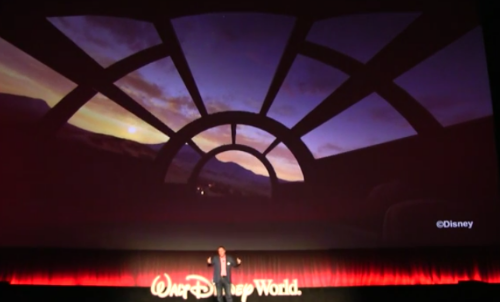 Our friends at Inside the Magic were on hand to catch a special presentation of the new land. While nothing major was announced, we did get the first look at footage from the Millennium Falcon attraction. The ride looks to take place on a screen, but will put you in the cockpit and give you the controls.
We can’t help but think that this new attraction will use the ride system that was unveiled a few years ago, which looks like a wind tunnel, and has the ride vehicles rotate around a center shaft.

The presentation also takes about several new dining options. There will be a cantina bar, which looks to be counter service, where guests can get unique quick serve dishes. There will also be a more upscale, sit down restaurant that will be the “best dining in the galaxy”. This restaurant will also feature live entertainment.

Honestly, it sounds like we are going to see a lot of animatronics, and characters in costume around the new land.

The land is rumored to be opening up in 2018, but don’t hold your breath on that one. Groundbreaking has just started at both Hollywood Studios and Disneyland.