Last week, BB8 did a little spy work, taking a look at construction at Disneyland. Now, it’s another droids turn to check out the happenings. The Disney Parks Blog is teasing something big, all involving the upcoming Star Wars Land, which is under construction at both parks now. 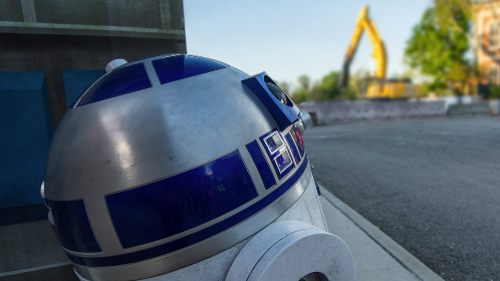 The picture shows off R2D2 getting a peak behind construction walls with a lot of construction equipment in the background. Of course, the images are blurry and you can’t really see much happening, it’s also hard to tell which park it’s happening, but the consensus is that this is Walt Disney World.

Why have a couple of images like this popped up? It’s a tease…something major is going to happen, but what? It could be a groundbreaking, it could be more details…at this point, no one really seems to know. It’s a clever way to get fans excited for the huge new area that is coming in a few years.

The news of Star Wars Land was officially announced last August at the D23 Expo in Anaheim. Very few details were given, but it was enough to set the world into a frenzy before the launch of the new film.

Video-Check out the full announcement