Spiderman and Iron Man will join forces in the upcoming Civil War, but what happens after that? We’ll have to wait until next year to see for sure, but we know Iron Man will be involved. The new film, Spiderman: Homecoming will feature Robert Downey Jr. as Iron Man! 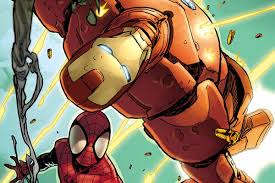 The two share screen time in the upcoming Civil War, but what will happen after the war ends? Well, we now know for sure that Tony Stark isn’t a casualty of Civil War. Tom Holland will play the webhead in the upcoming Marvel release, and he’ll reprise that role in next year’s Homecoming.

Iron Man and Spiderman seem to be a perfect match, and it’s clear that Marvel is happy to have him home. Kevin Feige has confirmed there’s potential for other Marvel Universe characters to appear in the film, but hasn’t said if there will be more than just Iron Man. We’ll have to wait and see.

While RDJ has just signed on, reports are coming in that say Michael Keaton is officially out. The actor was in talks to play a villain in the upcoming film, but those talks have since fallen through. Keaton could have played the long rumored villain, the Vulture.

That role was previously going to be handled by John Malkovich for Sam Raimi’s Spiderman 4. Maybe the legendary actor can still spread his wings.

Stay tuned for more from Marvel and Disney, and be sure to get social with us on Facebook and follow along with us on Twitter @BehindThrills for the latest updates!