According to a scoop by our friends  at Pixels at the Parks, Tanganyika Tidal Wave at Busch Gardens Tampa has closed. The long time water ride will no longer be splashing guests, as it has been confirmed to close. 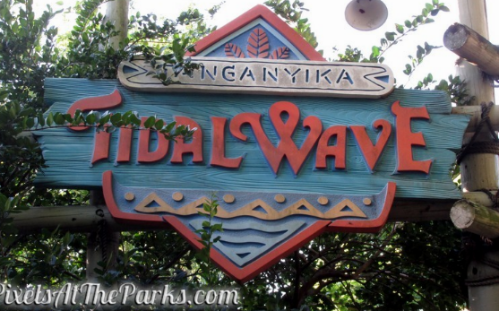 The attraction was originally built at the park as the answer to Disney’s Jungle Cruise, and themed to the African Queen. The boats would go in and out of animal displays, and would even feature live actors playing African Warriors.

The attraction became the Tidal Wave in 1989, where it would take riders through an African village, and would then drop riders 55 feet down the falls.
The ride was one of three water rides in the park, with the Stanleyville Log Flume, and Congo River Rapids still open.
The attraction has not yet closed for good, according to Busch Gardens, but no official closing date has been given.

It will be interesting to see what happens to the ride. Personally, the ride was a little on the slow side, as you meandered around an empty village.
Perhaps they could update the attraction with a massive new water ride that is more in line with new, more thematic and immersive direction the park has gone with attractions like Cobra’s Curse.