Miral and Warner Brothers have officially announced that a Warner Brothers Movie Park is coming to Abu Dhabi in 2018. Yas Island, home to Ferrari World, will feature the park. Rides are very well underway, and the park is expected to have tons of rides based on existing Warner Brothers properties, a hotel and more! 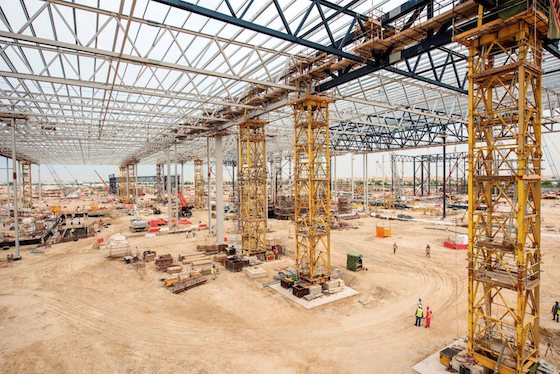 Warner Bros. World Abu Dhabi will bring together stories and characters from the Studio’s unparalleled portfolio of DC Comics Super Heroes universe including Batman, Superman and Wonder Women as well as Warner Bros. Cartoons such as Bugs Bunny, Scooby-Doo and Tom and Jerry. Guests of all ages will be able to step inside Gotham City and Metropolis, and experience the cartoon worlds of Looney Tunes, Hanna-Barbera and more, all under one roof.

The new park will be the third Warner Bros. Movie World, joining Gold Coast Australia and Parque Warner in Spain. It will feature the world’s first Warner Brothers themed hotel.
Kevin Tsujihara, Chairman and CEO, Warner Bros. Entertainment commented, “Warner Bros. has been entertaining audiences for more than 90 years with the world’s most-loved characters and franchises. Working with our partners at Miral, we’ll bring this expertise to Yas Island, one of the world’s leading entertainment destinations, to create a fully-interactive, innovative and unique experience that will allow fans of all ages to experience the most exciting aspects of Warner Bros. in a completely immersive environment.”

The one big question is, how will this effect the upcoming Six Flags Dubai project? The amusement park has announced that they will be bringing an all new park online soon, but with Warner Brothers licensing DC Comics to the Warner Brothers Park, will DC Comics play a part in the new Six Flags park?

IMG Worlds of Adventure in Dubai bringing Marvel, Cartoon Network and Dinosaurs to life this August!