First look at Harry, Ginny, and Albus Severus from Harry Potter and the Cursed Child! 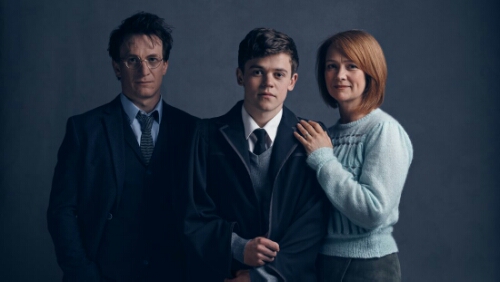 The Potters stopped for a family portrait, and it’s an amazing first look at the new stage play, Harry Potter and the Cursed Child!

Pottermore has the first look at the new cast, and they very much look the part! Jamie Parker is Harry Potter,Sam Clemmett is Albus Severus Potter, and Poppy Miller is Ginny Potter. As a longtime fan, it really sounds weird saying “Ginny Potter”.
The trio are the first in a series is character portraits that will be released on Pottermore.

The characters certainly look the part, but that wasn’t always the intention. The characters didn’t HAVE to match the characters in the movies, but it just happened that way, as the actors were just right for the role.

The play will open exclusively in London, and will also have a rehearsal edition of the script available for sale everywhere when the play opens later this summer.