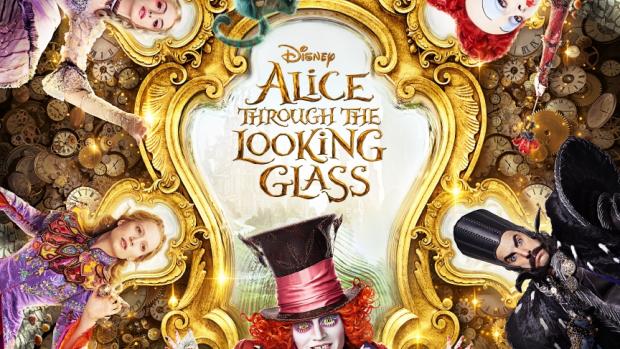 Let’s get one thing out in the open. I hated the first Alice in Wonderland. It was silly, it had very little to do with the original story. It was basically another excuse for Johhny Depp to dress silly and use one of his few silly voices. That, however, didn’t stop the original Alice in Wonderland film from making over a billion dollars at the box office.

Fast forward several years later, and here we are again with the inevitable sequel. All the major characters are back, and there’s some new ones. Yes, even Johnny Depp as the Mad Hatter. We won the chance to see the film as part of the Disney Parks Blog meet up, and quite honestly, had we not…we would have saved this one for Redbox.

So how bad was it?

In a shocking turn of events, it actually was pretty damn good.

The film picks up a few years after the original film, and shows Alice living her dreams…only to come home and find that while she was living her dreams, the rest of the world moved on and pushed her aside. With her father gone, and now the financier from the first film gone, she is left with a choice. Keep fighting for her dreams, or settle and become something she’s not. Just as in the first film, things happen at just the right time and Alice ends up going through the looking glass and back into Wonderland. Here things are not right as the Hatter, once again played by Depp, is fading away and dying. It seems he thinks his family, who was killed years ago, is still alive, and no one believes him. Alice then decides she has to turn back the hands of time, and change things. Only, that’s not as easy as it sounds, because Time is actually a person…and he doesn’t like to be trifled with. That’s where this stops trying to be the Alice in Wonderland that you know and love, and is just simply a crazy fun film that has the “Alice” title on it.

It really is crazy and fun too. Sacha Baron Cohen is insane as his stand alone characters, but it’s in his supporting characters that we always have the most fun with him. Here he’s insane and as over the top as Time Himself, but as the film goes on, you see a more vulnerable side to time that drums the point home, time isn’t cruel…he isn’t a thief…he is just time.

The other performances here are also fun, with less Hatter than the previous installment, and the doses that we have being very inventive and fun. We get a peek into his past, and find out that there’s more under the hat than that amazing orange hair. At the core of the story, there’s a theme of growing up and becoming who you are supposed to be, and who others want you to be. It hits home for many parents, especially me, as children grow up and become their own people with their own lives. We want them to fit into our ideas of success, and prosperity, but your plans and theirs seldom match.

Maybe it’s because I’ve just watched my own son graduate high school that the film hit so close to home. Many of our family are giving demands on his future, and trying to push him into a path that he just doesn’t want to go down…not yet anyway. Above all, that seems to be the key message of the film. No matter who our parents want us to become, or who our children become, we are still family. Come hell, high water, or big hats, that never changes. While we don’t have to like who they become, what’s made them who they are rests solely in the past…and as Time so cleverly points out, you can’t change the past. But maybe you can learn from it.

The film isn’t getting very good reviews, but if you halfway liked the first film, you’ll absolutely love the latest installment.

Alice Through the Looking Glass is in theaters everywhere tomorrow.