Video-Tour the all new Mako at SeaWorld Orlando

The newest coaster at SeaWorld Orlando opens on June 10th. While Mako is definitely getting ready to swim, it’s not quite there yet. We had the chance to your the construction area, and learn a bit more about the coaster. While the coaster will have a conservation theme, it’s going to be an amazing experience that you’ve come to expect from SeaWorld. From the queue, to the station and even the area around the coaster, Mako is a fully immersive experience that puts you into the fins of a shark. 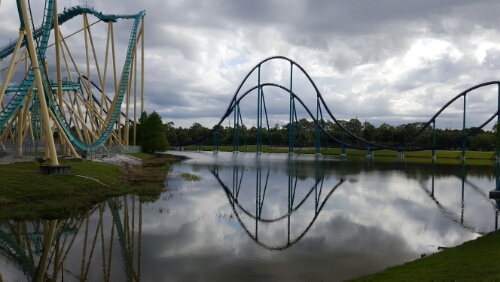 Just when you think you know everything there is to know about SeaWorld Orlando’s newest coaster, they let the shark out of the tank! We had the chance to take a walk behind the scenes of the all new coaster, and see how it’s progressing.

We started out with a walking tour of the soon to be finished queue, and loading station of the ride.

As you can see, the coaster is complete but there’s a ton of stuff still to be done on the rest of the ride. The queue is also going to be more than your typical coaster line. 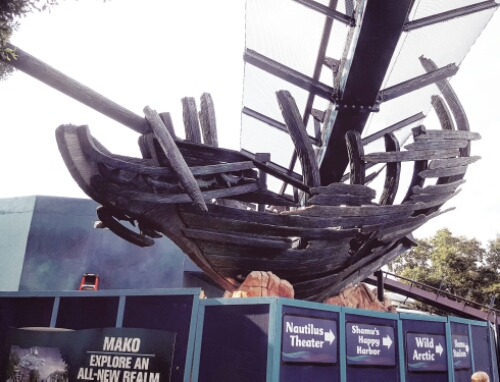 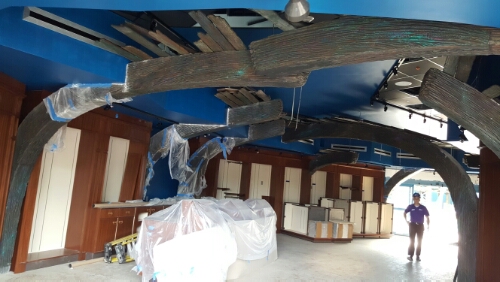 The entire area is themed to a shipwreck, and you are a shark. From the moment you swim into the ship (the rides entrance) until you swim out (the gift shop) you will be immersed fully into the underwater realm of the shark, patrolling the shipwreck.
There will be three education zones that will be hands on and teach families about sharks and the struggles they have to go through to survive. That’s just in the surrounding area leading up to the ride.
Yes, SeaWorld will teach you something while you’re having fun, it’s what they do. 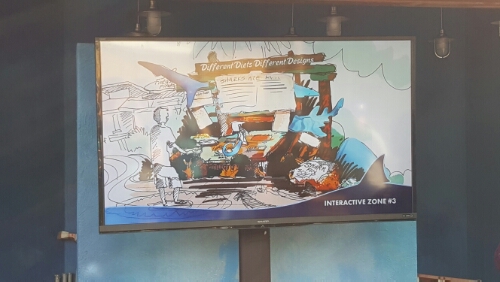 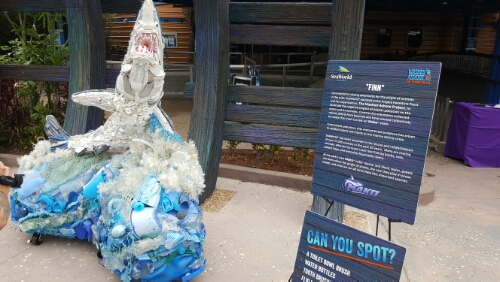 The entire realm, Shark Wreck Reef, will take you underwater and teach you not only about sharks, but also about helping to save the ocean. The unofficial mascot for the realm, Finn, helps to drive that point home. Finn is a Mako sculpture made from trash that was found on the beaches of Oregon. 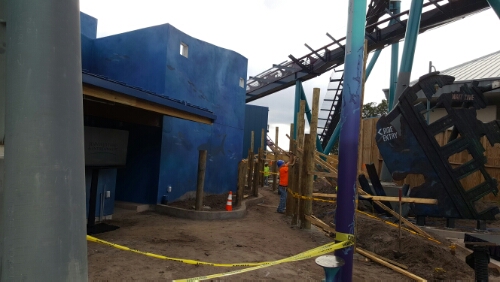 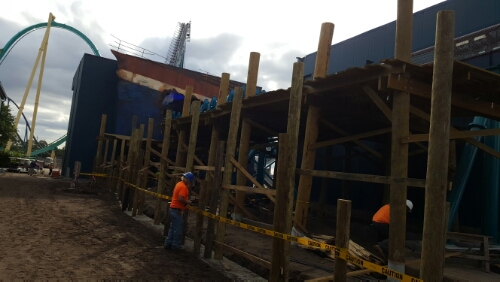 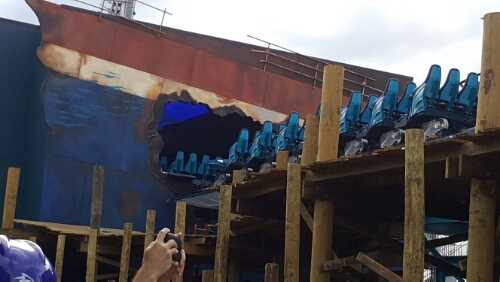 The real fun will start, however, once you get in line. The entire queue area will be themed to a dock, where sharks like to feed on prey fish. The line will snake under huge tarps, which will keep you out of the sun and will represent diving down into the water. There will be a video from Guy Harvey, that will take you live to an underwater location. You’ll see live footage of Mako sharks that the Guy Harvey Foundation filmed, along with the Sea Rescue TV show.
As you progress further, you’ll venture under the dock, and up the queue into the station. 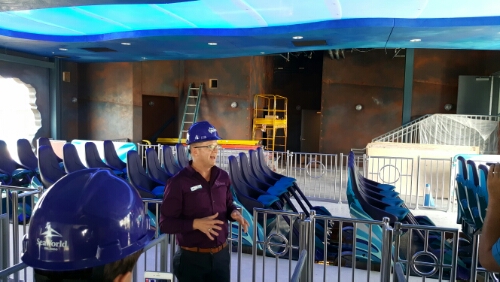 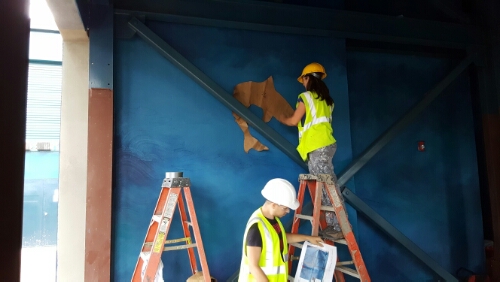 The station will be themed fully, and will feature the same kind of big moment that Manta has. The station will react to the guests, and the coaster. Through projections scenic pieces and even music, guests will take the role of a Mako as they venture out the station and up the lift. It’s a huge moment that takes guests from the bottom of the shipwreck and to the very top, near the surface of the water.

The ride will also utilize the actual structure for set pieces. Normally a support is a support, but in Mako the supports serve as props and will be integrated into the ride.
Another important aspect of the ride is the soundtrack. There are several key elements of the ride that will be set to music. That soundtrack will be available on iTunes, and was composed using the same location composer that has done the music for rides like Manta, and Antarctica.
You can hear a bit of the music as Mako tests at SeaWorld.

The ride itself, well…it’s going to be epic. The ride has been designed down to the color scheme to give off a feeling of being on the water. In fact, 92% of the ride is over water. From the lake near Kraken, to the turn around on the waterfront. The open design of the car and the huge drops make it feel like you’re actually in the water, rushing along.
Why a hyper coaster? A hyper coaster is capable of amazing speeds, and great turns. The Mako shark is the fastest shark in the ocean, often times coming out of the water. It’s the perfect type of representation for the shark as you get amazing airtime on the coaster.

The ride will be the perfect blend of thrilling coaster and conservation message. What SeaWorld and Guy Harvey hope to accomplish with Mako is a message that sharks, while ferocious, are a necessary part of the ecosystem that needs protection. Every year about 100 million sharks are put to death for their fins. We are about to hunt an entire species to extinction for the sake of an appetizer.
Mako will open on June 10th at SeaWorld Orlando.
We will have more pictures and videos later today, so be sure to check back.