Finding Dory, SeaWorld and the very mixed message about animals 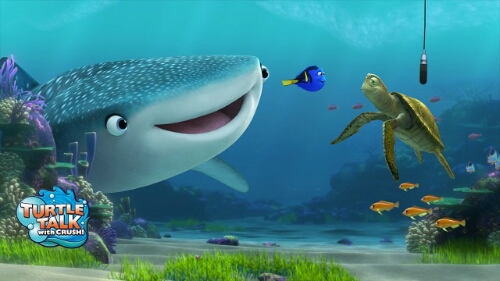 Finding Dory is a bonafied hit. It’s doing so well that we should probably expect to see “Finding Marlin” within the next five or so years. The film is sending waves through Hollywood, and ripples through the animal activist community, who are calling this a victory and another slam against SeaWorld. Is it though? There is definitely a mixed message, and in this day and age it’s definitely a bit irresponsible to make a film like Finding Nemo or Finding Dory without sending a positive message about our oceans, especially since they are in such dire need of attention.  Before we go any further, there will be spoilers.

Let’s get the basic story out of the way. Finding Dory is the sequel to Finding Nemo, and picks up about six months after the first film ends. It’s a cute, heartwarming story about the Blue Tang, Dory who sets out to find her family. No, Dory isn’t lost from her friends. So why is it called Finding Dory? Because Dory sets out to find herself. Right there we know we’re in for a deep movie going experience, and while the animals are cute, they aren’t just there to sell toys…I mean, they are…but, there’s a deeper meaning for them all.

We are about to completely ruin the movie for you if you haven’t seen it, so be warned.

The original release date was pushed back from 2015 to this year, after the anti-SeaWorld film Blackfish was released. The filmmakers and executives allegedly felt the original ending wasn’t responsible, and the animals shouldn’t have to be kept in captivity. We’ll talk more about this later. The ending was changed, and now we have a hit.

In the movie, Dory finds out she comes from an Ocean Park, much like SeaWorld. This park helps animals, but it also has animals on display. The park rescues animals, nurses them back to health, and if they can return to the ocean, they are tagged and put back in the water. If they can’t be returned, they are put on display and live out their lives behind glass, or get shipped to Cleveland. This part mirrors SeaWorld’s real life efforts, because they too rescue animals and rehabilitate them. However, it’s not the park that makes the call on release, it’s the Federal Government. If the animal can’t be released, then yes, they live at SeaWorld, sometimes on display and sometimes performing.

This part is important.

We meet some fun new characters like Hank the Septopus (he lost an arm), Destiny the nearsighted Whale Shark who bumps into things, and Bailey the Beluga Whale who can’t use his echo location. The end of the movie sees a truck full of animals being shipped to Cleveland for a new exhibit, with Hank and Dory turning the truck over in the water, and setting all the animals free. Oh boy.

Here’s where the activists are trying to say it’s a victory, “riding the wave of anti-captivity sentiment” according to activist website, the Dodo.

Actually it doesn’t do that, but it’s easy to see why they might think it.

Let’s go more into the marine park for a bit. The park is clearly meant to mirror SeaWorld (and other marine parks and zoos), and even has a ton of Sea Lions hanging out after being rescued. Rudder and Fluke, two Sea Lions hanging out on a rock by the park (OFF!OFF!OFF!) even show off their tags after being released saying something like “They’ll fix ya right up”.  It’s not seen as a bad place, or even a prison, it’s a great place to go for the animals who need help.

Destiny and Bailey, however are still in the park because Destiny can’t see and keeps bumping into things, and Bailey can’t use his echo location. For a beluga that’s very important, because that’s essentially how they hunt and communicate. The animals in the truck going to Cleveland? They can’t be released either. Hank the Septopus? He can go back into the wild, and he chooses to stay because life in the ocean is “too hard”. This coming from Al Bundy!

The original ending had everyone allegedly living in harmony at the aquarium, and all is well. As we mentioned before executives allegedly didn’t want to be anywhere associated with SeaWorld and captivity, (not sure from either the writers, or just away from the controversy) so they ended up changing the ending to where the animals could leave if they wanted to. Actually, the animals in the truck and the animals like Bailey and Destiny ended up leaving, even though they shouldn’t. The animals weren’t released for a reason, in the film, and at the ending they got their freedom anyway. Were they just convicted to a death sentence? And there’s the mixed message.

Yes, animals were born in the ocean, belong in the ocean. However, we create a world for them that is full of danger and toxins. We dump cars, and bots and huge levels of poisons. If an animal needs rescuing, places like SeaWorld rescues them and if they can be released, they are released. If they can’t be released, it’s for a good reason and not because “we need animals”.  The mixed message that the film gives is that…okay, the park is good…but it’s ultimately bad, even though the animals are still sick and can’t be released. It’s confusing to say the least.

Meanwhile, you can go visit all of these animals (minus the whale shark and beluga) at Disney’s own animal exhibit, The Seas with Nemo and Friends.

While films like Finding Dory are fun, they also bring about another dark side to it as well. After the first Finding Nemo, Clown Fish became such a hot demand that they were almost fished to extinction.  Experts are so worried that this will happen again, that months ago Australian scientists set up a breeding program to breed more Clown Fish and Blue Tangs. They set it up not so that they could make money, but because they don’t want to see that population reach those 2003 record low numbers again!
The ultimate take away from the film shouldn’t be about captivity or not, nor should anyone (including us…yes, in the middle of this article) try to make the film about their side. The film is about family and finding who you are, and what is most important to you.

The ultimate take away from this article, is that we need to be responsible for the ocean. While you may or may not agree with SeaWorld, that doesn’t matter. They aren’t really the bad guys here. You are. But you don’t have to be.

Dory is amazingly cute, so is Nemo. If you want those types of fish, make sure you ask where they are harvested from. If they are farm raised, or bred, then great. If they are caught in the local oceans, then move on. We need to take care of our oceans and the animals in them, from the little clown fish to the sharks and even the big cars that we dump in. One day, we will need it more than ever.

Also, SeaWorld is sponsoring Rising Tide Conservation. They help produce sustainable Aquaculture in order to help protect the reefs and fish in the ocean. It’s a great organization that brings more fish and more awareness to the world about our oceans!

Ellen Degenres, who plays Dory said it best when she told Yahoo News that “It’s about rehabilitation and putting them back in the ocean… And we have to protect our oceans. Hopefully that discussion starts with this film, because we really need to protect that environment.”

It’s about our oceans, we need to protect them.