After yesterday’s big announement left fans wanting a bit more, Universal Studios Hollywood announced today via Variety more plans on the future of the theme park. The focus will be expanding the lower lot by removing a total of 13 soundstages that currently surround Transformers, Mummy and Jurassic Park, which will add close to nine additional acres to the park.

The soundstages will not entirely be removed, as many new facilities will be built elsewhere on the backlot in the current location of Park Lake. This would unfortunately mean the loss of studios horror history as Park Lake is the original location of The Black Lagoon from Creature from the Black Lagoon, as well as the lake Norman Bates dumps Marion’s body in the original Psycho film, both iconic film locations that helped to pave the way for Hollywood history.

The new soundstages will be a continuation of Universal’s Evolution plan that was supposed to end with the completion of The Wizarding World of Harry Potter. Currently, in the former location of Soundstage 28, a new structure has broken ground rumored to the Secret Life of Pet’s attraction that was announced to be in development at a shareholder meeting earlier this week. This is indeed a good sign that the park is seeing the attendance growth it needed, and it’s also an indication that future growth is not only being planned for, but expected. 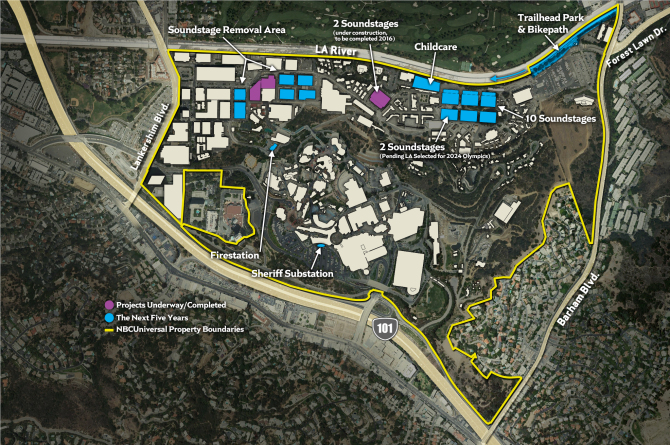 The pending options of an additional expansion come at an interesting time, as Los Angeles is in the running to land the 2024 Summer Olympics, which NBC would have the broadcast rights to. Assuming that does happen we could see some major new attractions coming to the park, in addition to this new five year expansion. With Japan hosting the 2020 Olympics, both Universal Studios Japan and Tokyo Disney Resort have announced huge expansions. Universal Japan has already announced that they will be opening the all new Nintendo themed land, the first of the deal between Universal and video game pioneers, Nintendo.

As for a timeline on all these changes, it’s happening sooner than you think.

Last week during a conference call, Comcast announced that they will be bringing the world of “Secret Life of Pets to life” in it’s theme parks. While they didn’t say exactly which theme park it would begin in, the safe bet would now be Universal Studios Hollywood.

The film has not been released yet, which is a huge gamble for Universal. If the film doesn’t do well, will a theme park attraction be well received? Perhaps, but Illumination Entertainment has a massively successful track record with Despicable Me, Hop, The Lorax, and Minions. The rumors of the ride have been in motion for quite a few months, and it’s likely that part of the new expansion will continue with this new attraction.