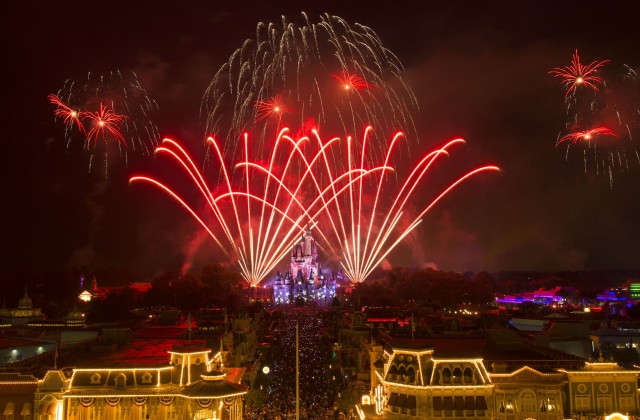 From fireworks, to the Force, Walt Disney World will celebrate the 4th of July in true Disney style. The resort will have massive offerings for the 4th, and will stay open a little later for the huge crowds that hope to celebrate with them. The park will be celebrating America in a huge way.

The fun rolls out at the Magic Kingdom with a huge fireworks display on the 3rd and 4th at 9p.m.

“Disney’s Celebrate America! A Fourth of July Concert in the Sky,” July 3 and 4 at Magic Kingdom. The 14-minute fireworks spectacular rockets into the sky above Cinderella Castle at 9 p.m. both nights.

The fireworks are set to an exciting musical score produced in a concert band style. This score was specifically created to stir a sense of pride in being American, show producers say, while at the same time, inviting guests from around the world to feel part of the celebration.

You can also celebrate our American pride with the Hall of Presidents, which gives guests a look at all of our past presidents and their accomplishments.

Guests can enjoy the all-new “Star Wars: A Galactic Spectacular” fireworks nightly, with the show beginning at a special time of 9:30 p.m. for the holiday weekend, July 3 and 4. The next generation of Star Wars-themed fireworks shows, “Star Wars: A Galactic Spectacular,” dazzles with new themed fireworks, lasers, special effects and video projections of iconic characters and scenes from the complete saga, all set to the unforgettable score of the film series.

Guests visiting Epcot on July 4 will have the opportunity to meet some of their favorite Disney characters dressed in patriotic attire throughout the afternoon at the American Adventure Pavilion. Voices of Liberty, the eight-part a capella group, will have special performances at American Gardens Theatre at 12:30, 1:45 and 3 p.m. They also will perform inside the American Adventure Rotunda at 4:15 and 5 p.m. that day. Guests also will have the opportunity to catch the Spirit of America Fife & Drum Corps outside at 1, 2:15, 3:30, 4 and 4:45 p.m.

Of course, there’s also the hugely patriotic We the People, inside the American Adventure, that takes you through our greatest achievements with Ben Franklin and Mark Twain.

While nothing new or patriotic is happening at Animal Kingdom, you can still catch the amazing new Tree of Life Awakens at night, as well as the Jungle Book Alive.