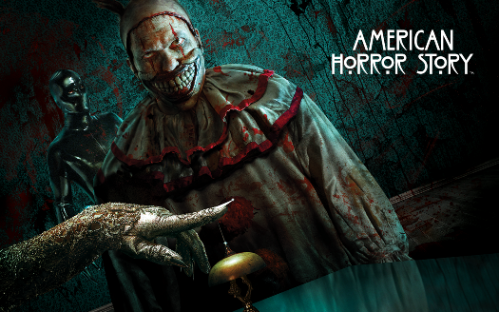 Murder House, Asylum, Coven, Freak Show, Hotel. It’s hard to pick a favorite season of American Horror Story. The Anthony horror series is about to roll into season six on September 14th, which is a strange coincidence, since Halloween Horror Nights starts on September 16th. Is it really a coincidence though, or is it all part of the story?

For the past 4 years, AHS has been one of the most fan requested properties to ever for Halloween Horror Nights on both coasts and the fan’s prayers (or screams) have finally been answered! American Horror Story is coming to Halloween Horror Nights at both Universal Studios Hollywood and Universal Orlando. Guests will have the chance to mingle with characters from series and will be completely immersed in the stories in these brand new houses.

Murder House, Freak Show and Hotel will all be the setting of the new UBER maze at Halloween Horror Nights Horror Nights, where guests wwillbe confronted with the terror that resides in the Harmon Residence, see the aftermath of the Freak Show and come face to face with Twisty the Clown. Guests will even go through the rooms of the Hotel Cortez, and encounter The Countess. The parks have worked with creator Ryan Murphy and Fox to bring the most authentic experience ever to life.

“‘American Horror Story’ is one of the most disturbing television shows ever produced, and with such perverse storylines unfolding with each installment, ‘Halloween Horror Nights’
is undoubtedly the only place that could create a living version of the nightmares that Ryan Murphy dreams up,”
said John Murdy, Creative Director at Universal Studios Hollywood and Executive Producer of “Halloween Horror Nights.” “Plus, as a fan favorite,
‘American Horror Story’
has been the number one requested maze from our guests and we’re excited to let them know that we listened to them and are bringing ‘American Horror Story’ to life.”

“‘American Horror Story’
is engaging for so many reasons, one of them being the fantastic way each installment of the series reveals completely new characters and stories for its viewers,”
said Michael Aiello, Director of Entertainment Creative Development for Universal Orlando Resort. “It’s that constant evolution that makes this popular series a perfect fit for Halloween Horror Nights – and we can’t wait for our guests to experience some of
the horror they’ve seen on the show.”

In Orlando, American Horror Story joins a massively stellar line up that includes Texas Chainsaw Massacre, Halloween 2, The Walking Dead, Krampus, amd The Exorcist. There will also be three original mazes that range from a 3D asylum,a cursed ghost town, and even a tomb of ancient civilizations that is actually a pit from hell! The park will also utilize original themes for scare zones throughout the park.

In Hollywood, Universal bring out one of their best line up of mazes ever featuring Freddy vs. Jason, Texas Chainsaw Massacre and Halloween 2, along with Krampus, The Exorcist and The Purge will take over the entire park as guests will fall victim to the 12 hour Purge in the new mega scare zone. The event’s main shows and Terror Tram theme (this year will be an original theme) have yet to be announced.