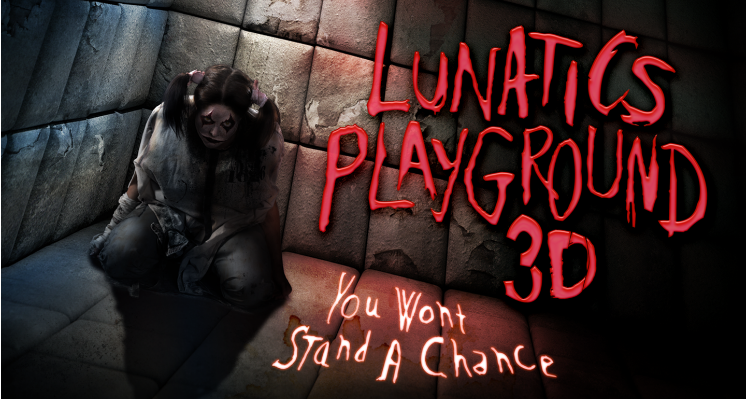 Universal has taken the buckles off of the straight jacket, and has given us a peek at the madness that lies within. The already stellar line up for this year’s Halloween Horror Nights 26, has just been boosted by some INSANE original content, including all new scare zones, and original houses.

Lunatic’s Playground 3D-You Won’t Stand a Chance: Chance gets to play in this all new house. It seems to deal a lot with the dual side of things, with Chance being locked away. When you hear the music box, you’re tossed inside her imagination. When the alarms sound, you’re thrown back into her nightmare that is her incarceration.

This maze is a bit of a throwback, as it revisits Lightning Gulch from the original Ghost Town. This time around the town is cursed and only appears when lighting strikes. The souls of those who died searching for hold are looking for more to join them.

The first Ghost Town was a great take on the Old West. While this one doesn’t look to follow the exact same story as the original, it promises to bring new some new horror to the mixture.

Tomb of the Ancients:

This one looks like a lot of fun. The crypts and tombs of ancient civilizations come to life as a forgotten place becomes the actual pit of hell.

This one sounds like it could be a lot of fun. Some people complain about mummies being used too much, or not scary…but if done right, mummies are out right terrifying.

The scare zones have what sound like five amazing and different themes. Each one exploring something different, and if you look, each one telling two sides.

This year we get two shows, the first being the return of Bill and Ted. If you’ve never seen the show…well, you’ve been missing out.

The second show has been featured on America’s Got Talent. Academy of Villains will be bringing out an all new show called House of Fear. The show will bring inmates in an explosion of insanity either dance numbers, and specialty acts.
There’s one more house left to be revealed…and we’re sure there’s going to be a story behind it.