Today Disney made the announcement officially that Disneyland in California will be the star of this year’s annual Disney Parks Christmas Day Parade. This seems to make a bit of sense as last year the Christmas Day Parade took place entirely at Walt Disney World, the roles this year will be completely reversed and the parade will almost entirely be shot at Disneyland November 9-13. 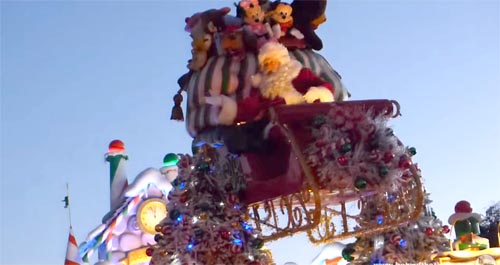 That’s not to say Walt Disney World will not be involved in some shape or form. Many musical performances will take place, though it’s uncertain how accessible to the public attending them will be or if they’ll be shot entirely in private. While it’s nothing new to feature both parks in the Christmas Day Parade, traditionally the focus has been on Walt Disney World in the past. This year seems an odd time to focus on Disneyland, as they JUST wrapped up their 60th Anniversary Celebration.

For those unfamiliar with the Christmas Day Parade, the park films huge performances and special segments weeks before Christmas. It then airs the parade on Christmas Day.

Disney also announced that in addition to the parade, they’re also going to be filming a series of holiday specials at both Disneyland and Walt Disney World to air during the month of December on the Disney Channel. This marks a first for The Disney Channel, and it’s very exciting to see more of the parks we love!